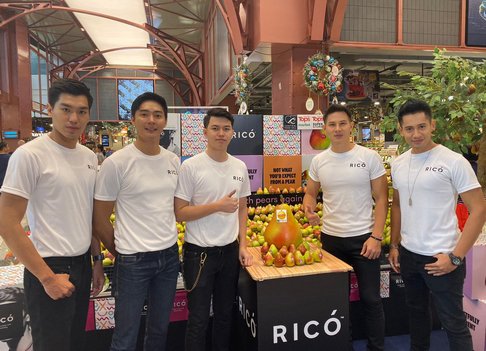 The Thailand market cannot get enough of one of Australia's newest pear varieties.

In November, APAL officially launched the brand Rico®, and since then has sent small volumes to the Asian country. Apple and Pear Australia Limited (APAL) Head of Quality and Innovation Andrew Mandemaker says it has been extremely successful, and there are already plans to expand.

"We sent as much fruit as we thought that they could take - they consumed it all, and wanted more," he said. "We launched in the high-end supermarket, TOPS, and they were very pleased, especially with the eating quality, and the way that it ripened up. Thailand will be our biggest export market again, with our next crop coming up."

The pear was bred in the Northern Victorian town of Tatura, as a part of the state government's breeding program, and has completed a journey of more than 10 years from the initial breeding program to numerous growing and consumption trials. This year is the first full commercial season, after an initial small crop last year.

"It's a blush pear, with a green-yellow background, with a reddish-brown blush on one side," Mr Mandemaker said. "It has a very good eating quality. The main varieties that we have in Australia are hangovers from the days of canning; so, Williams, Bosc and Packham - they were from a day when most of the pears were going to processing. Now most people eat their pears fresh, so there is a real demand for pears that are ready for eating; much sweeter, can be eaten soft or hard, it ripens well and has an interesting taste profile that is complex. Also, the blush really shows it off."

The variety is controlled by Agriculture Victoria Services (AVS), which is the commercial arm of state government, and require that a certain number of trees are planted for royalties, while APAL owns the trademark, in a similar style to the Pink Lady apple.

Rico® is produced in Australia by controlled group of four large growers in Victoria's Goulburn Valley, and a number of other smaller growers, including overseas.

"The Goulburn Valley is the best pear growing region in Australia, so we have kept it to where pears grow best," Mr Mandemaker said. "We are beginning to grow in the United States as well, for the purposes of supplying that market, and to support our exports. In the future there will be enough pears in the U.S.A to support markets like Thailand; half the year from Australia and half the year from America."

Domestically, the Rico® pear has been sold at high-end independent retailers for the past two years, with more outlets to sell the variety, as more volumes come on line in future years. But Mr Mandemaker says it was a pear developed primarily for the export market.

"We have got a target for a number of export markets right across Asia," he said. "So, it is absolutely intended to be a brand that is intended for the export markets, and we focus quite heavily on Asia, pretty much to the exclusion of others really. It's well liked by the Asian consumers and we've done a consumer taste test in Jakarta (Indonesia) and Bangkok, with Colmar Brunton, and the consumers really like it. We also know the Asian market really likes blush, and they make a strong connection between the deep blush colour and a sweetness of the product in the purchasing habits. They definitely like the product to be sweet. So, we are aiming for the Asian market as our first home."

This first season is coming to a wrap now, but APAL says there is another big harvest of the variety coming up over the next few months.