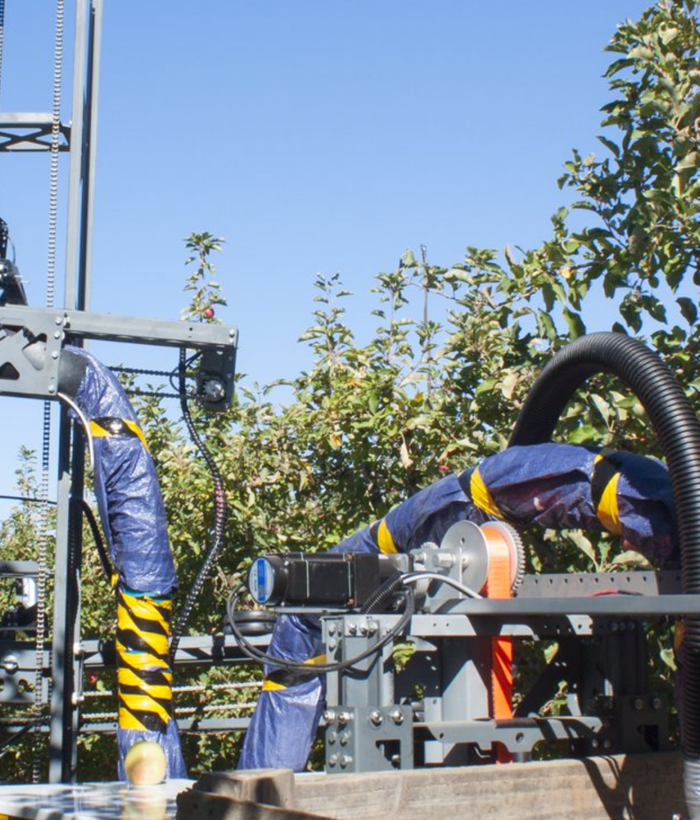 Apples will be harvested robotically at Goulburn Valley-based Turnbull Brothers Orchards this season in what is believed to be the first commercial trial of robotic apple picking in Australia.

Alex said while they were not relying on the robotic harvester with its single suction arm to bring in the entire 9-10,000 bin apple crop, they were hoping to learn a lot about the technology through the trial to better position themselves as early adopters.

“We will have them here for the entire season from late January to May doing Gala, Granny Smith, Modi and Pink,” Alex Turnbull said. “If the guys are interested to give it a go on pears, we hope to do a trial on Williams pears and wouldn’t mind trying canning peach.

“We are very excited about the flexibility we hope it will bring to harvesting in the long term.”

Alex said the timing, with harvest labour forecast to be in short supply, was serendipitous rather than a labour-shortage response. A Seasonal Workers Programme team from Samoa would provide labour for the third year.

“We don’t think this is going to solve our labour issues this year,” he said. “It’s a proof of concept. At the rate they have offered it to us it is comparable to the cost of labour.

“For it to be viable we really need it to be more productive. This one they are planning to use has got one arm picking at the moment. In future it might have many more and it can work during the night.

“We wanted to understand it ourselves and see if we need to modify the tree architecture or what else we might need to adapt to put us at the bleeding edge.”

“Other people have been trialling harvesters from the US and NZ, but we like the fact that Ripe Robotics are Australian, they are young and enthusiastic and keen to be in the industry and we would like to work with them.

“It is still a commercial understanding – just like you would pay a picker. We pay a deposit, but a piecework rate thereafter.”

Alex said the predominantly Tatura trellis and vertical 2D systems on the orchard were suitable for robotic harvesting.

“I guess we were of the mind even 20 years back the future was robotics or mechanical assist and we started preparing for that.”

The Ripe Robotics team has been hard at work this year testing their machine on a range of apple and orange orchards prior to launching a small commercial fleet in 2021.

“If we can pull it off it will be revolutionary for the industry, especially now,” he said. “We’re super excited to be working with Chris, Alex and Mitchell on this and are looking forward to meeting other growers interested in advancing the technology locally.”

The robot is designed to work on a range of different orchard layouts, but is most efficient on modern 2D trellis or V-trellis blocks.

A new version of the robot is to be launched next year and the focus of the trial will be on increasing speed and reliability, with continuous upgrades managed from a local headquarters.