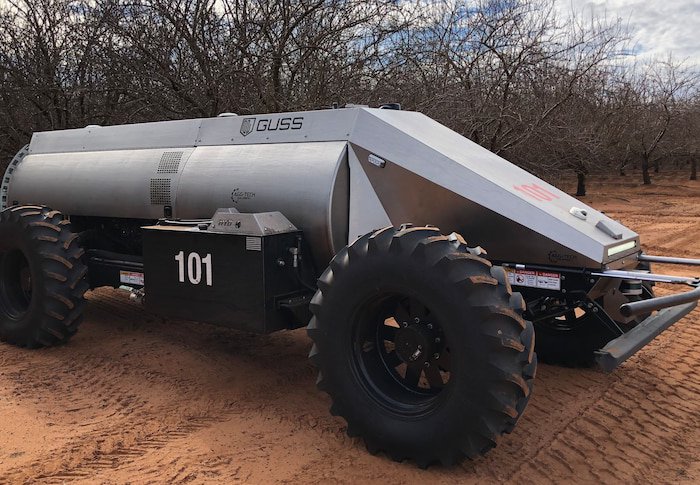 They might look like something from a movie, but driverless spraying machines could revolutionise the almond industry.

In an Australian first, Olam International has spent more than $4.5 million on 10 autonomous machines that roam around their almond orchards at Wemen in north--west Victoria, spraying fungicide. And the spraying program can be completely controlled by two people on laptops.

Up until now, almond growers in Australia have relied on manually operated tractors towing aerofans to distribute the chemicals.

"On the operational efficiency side, we are looking at about a 20 per cent uptick in area covered by fewer machines versus the conventional methods," he said.

"In terms of cost efficiency that is driven by labour, and as you can appreciate there's a lot less labour involved in operating these machines.

"The second would be repairs and maintenance costs and the third would be fuel," he said.

"Mainly what we are doing is creating spray paths for these autonomous vehicles, sending them on their way and monitoring them on an ongoing basis to make sure that everything is operating as it should be," he said.

"A big part of it, of course, is coordinating the fill process with the chemical refill vehicle."

Mr van Rensburg said each GUSS cost $260,000 US but the company also needed to spend more than one million dollars improving the connectivity on its farms in the Wemen area, so the trial could take place.

"Ideally as a default these machines operate with cellular connectivity, they have the ability to also operate with radio.

"We have had to revert back to radio connectivity using the 400mhz band but in terms of how the software is put together the machine, fortunately, has the capability of using both, so if one fails it automatically reverts back to the other," he said.

Mr Pringle has recently been involved in recruiting the staff to help with the autonomous farming trial and said both agricultural science graduates and other tech-savvy people have been appointed to the roles.

Olam plans to identify other sections of its almond production business that could be automated, but Mr van Rensburg said having better cellular and data connectivity was essential.

"This is absolutely critical for us, not only as a business but for the industry as a whole for this to happen in regional areas specifically," he said.