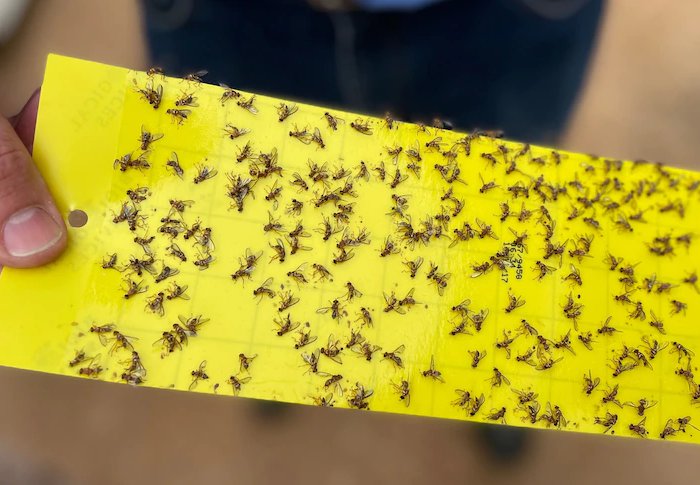 More than 2.5 million sterile fruit flies have been released in the Riverland, as the region battles five outbreaks of Queensland fruit fly, which could cost local farmers and communities millions of dollars.

Member for Chaffey Tim Whetstone has called on backyard fruit tree owners to strip their trees of fruit to do their part to help get the region's $1.3 billion horticulture industry back to their fruit fly-free status.

"I think it's a small ask in a very big picture," Mr Whetstone said.

"Over 33 tons of fruit have been collected, we would imagine that there would be significantly more fruit to be collected if people were to strip their trees."

He said the full economic impact of the outbreaks was yet to be seen but it cost growers more than $4 a case to treat their fruit.

"I am estimating it could be $20 million and be as much as $30 million coming out of the local economy. That's significant, and so we have got to make sure we do everything we can to eradicate this pest."

The technology is the first insect pest control method based on genetics.

The technique involves the breeding and sterilisation of male fruit flies with an x-ray before they are released into an area with a wild population.

Once the sterile male flies are released in an infested area they mate with wild female fruit flies which eventually become outnumbered and die out.

"We are doing around 3.5 million flies per week. We have got a six week program in mind now, and then we review it and see if we need to do more," Mr Secomb said.

South Australia remains the only mainland Australian state that is classified as fruit fly free, with the Riverland having a special pest-free status within that zone.

There are currently five active outbreak zones in the Riverland, with the latest declared last week in Berri and Pike River.

Mr Whetstone said he still remains hopeful of keeping that position and believes the release of these sterile fruit flies will alleviate the threat.

"The Riverland is under siege with fruity fly, and the eradication program is critical."