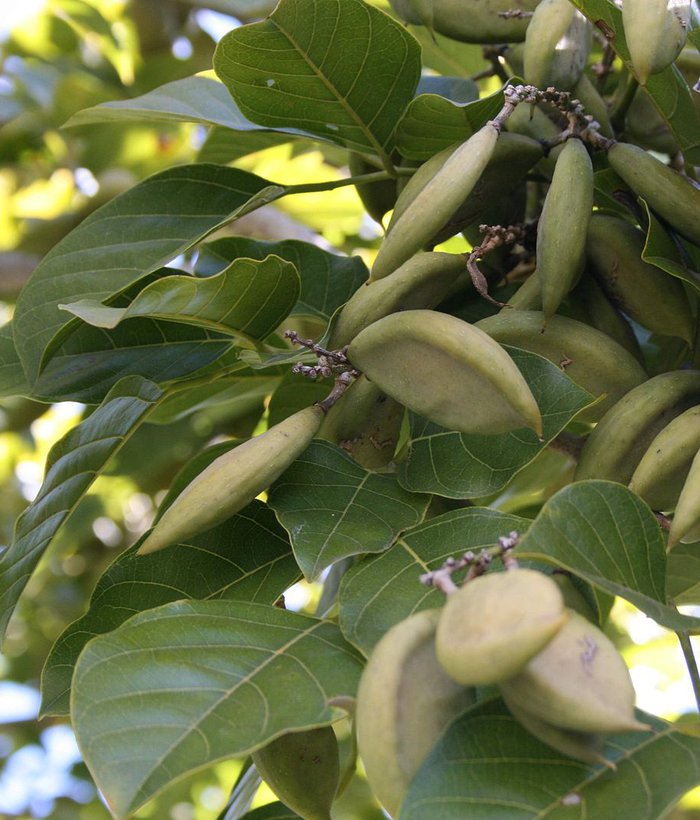 For centuries, pongamia has been used across the Indian subcontinent to fuel lanterns and stoves, make soap and tan leathers, and in traditional medicine. Native to northern parts of Queensland and the Northern Territory, this hardy legume tree now offers an opportunity for production as a sustainable, lower emission alternative to non-renewable transport fuels.

The resilient nature of the plant – drought-tolerant and able to withstand heat, salinity and flooding – combined with its ability to produce its own nitrogen, makes pongamia an ideal candidate for production on land unsuitable for broadacre cropping in northern parts of Australia.

Industry experts suggest that an area of two million hectares could result in the production of eight billion litres of biodiesel per annum. Based on equivalent crops, this could generate an estimated income of $7 billion including pongamia by-products. In addition to the potential economic advantages, the creation of upwards of 16,000 jobs and the stimulation of regional development is also predicted.

With the aim of evaluating pongamia as a sustainable biofuel, AgriFutures Australia has invested in research to determine the potential of the crop in Australia. The project will include a preliminary economic study to examine the viability of the crop, and the development of a technical manual that will detail how to establish, manage and harvest pongamia in northern Australia.

“Pongamia has previously been deemed unviable in several economic studies, however in recent years, advancements have seen treatments developed that make the protein meal useful as a plant based stockfeed which further add to crop opportunities.”

“The results of the review will help determine whether future support is made to undertake a full economic study into the viability of pongamia,” she said.

George Muirhead of Bioenergy Plantations, a commercial pongamia plantation company, said there are two key factors that have substantially changed the economic potential of pongamia.

“Initially pongamia was explored purely as a renewable energy, with the oil used for bio-diesel. Significant research has shown the value of the meal, which alters the economic model completely.

“In Indonesia and the United States, removal of the alkaloids from both the oil and meal have made them suitable for human and animal consumption, which considerably increases the financial viability of pongamia.”

Mr Muirhead said the other important development has been the ability to successfully propagate pongamia through cuttings.

“Previously yields were unpredictable and the trees had a high degree of variability, which had made it difficult to achieve industrial scale production. The reliable growth and cropping behaviour and consistent repeatability that comes with cloning the parent tree has been a major breakthrough.”

Leading the project is Peter Wylie of AgriPath, an agricultural management consultancy, who said the potential benefits of pongamia extend across Australia.

“Pongamia shows promise as an incredibly productive source of biofuel in vast areas of northern Australia where conventional cropping has struggled to be sustainable. For example, the yield of seed from irrigated pongamia at Kununurra, Western Australia has been measured as high as 22 tonnes per hectare, which compares well with the average yield of canola across Western Australia of around 1.4 tonnes per hectare. Both crops have an oil content of around 40%,” explained Mr Wylie.

“Pongamia offers an opportunity for agricultural development due to its ability to grow on marginal land. As a legume, pongamia does not require nitrogen fertiliser and feeding the protein meal to livestock could also help to restore fertility on nitrogen depleted grazing lands.“

Mr Wylie said that while the primary interest in pongamia is the conversion of its oil for renewable transport fuel, this versatile crop offers many other uses.

“While significant progress has been made in the renewable electricity sector, advancements in the sustainable transport fuel industry has lagged, and Australia currently has limited alternative fuel sources.

“In addition to biodiesel and renewable jet fuel, pongamia can help further mitigate the impacts of climate change, acting as an effective carbon sink, while the seedpods can be used for biomass energy. If the value of all these outputs is added to the use of the protein meal as stockfeed, pongamia is likely to be very profitable. This value could increase if the removal of all the unpleasant ingredients from the protein meal of the pongamia tree enables its use as a human food.”

If you’re interested in learning more about pongamia or want to be involved in the project, workshops and other pongamia research, please register your interest via email to Peter Wylie at peterwylie@agripath.com.au.