How Australia is shaking up the truffle market 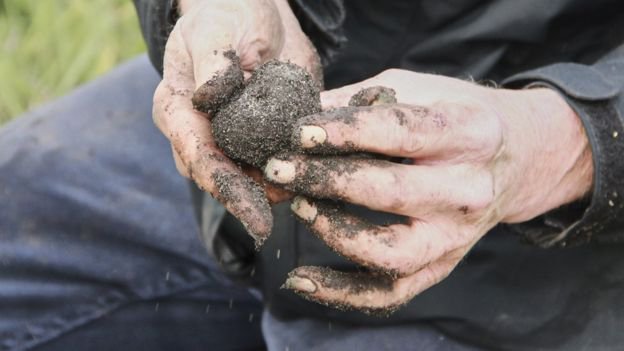 When his dogs sniff out a prized black truffle under the soil, Nigel Wood says it is always an exciting moment for the accompanying humans too.

"The atmosphere is usually one of enthusiasm, excitement, anticipation and curiosity," he says.

If you asked people to try to picture hunting for truffles, the expensive subterranean fungi, many would no doubt imagine men with dogs going through woodlands in France or Italy.

Given that truffles have been harvested in both countries for centuries, this is understandable. Yet since 1999 they have been joined by Australia, which in just 20 years has become the world's fourth-largest producer of the most-prized type of black truffle - the French black or périgord.

Some in the Australian industry, such as Mr Wood, the owner of Truffle Paddock, a truffle farm in the state of Victoria, even believe that in another decade's time the country could take the number one position.

While exact country-by-country figures are difficult to come by, given the secrecy that surrounds the "diamonds in the dirt", Australia is expected to harvest between 14 and 18 tonnes of French blacks this year.

This compares with an estimated 60 tonnes last winter in Spain, 30 tonnes in Italy, and slightly more than Australia in France. (Industry experts say it is notoriously difficult to quantify French production figures due to a lack of data, and accusations that it imports périgords from Spain that then become "French".)

What is not in doubt is that selling fresh French blacks is a very lucrative business. Much in demand in the world's finest restaurants, they can retail for up to $1,300 (£1,000) a kg.

Not native to Australia, they were first introduced to the country in the mid 1990s, with the first Australian truffles unearthed in 1999. To cultivate or farm the truffles, trees - typically oak and hazelnut saplings - are replanted after their roots have been inoculated with the fungus' spores. Then five to eight years later you can start to harvest the resulting black truffles.

As périgord truffles are harvested in the autumn and winter, the season in Australia runs from May until mid August. Geoff Barrett, co-founder and managing director of Oak Valley Truffles in Western Australia, says this gives the country's producers a huge advantage because they are selling their crop when they are none available from Europe.

"Australia's truffle industry is doing so well because we don't have any competitors," he says. "We produce truffles in the southern hemisphere when there are none in the northern hemisphere."

Given that fresh truffles only have a shelf life of two weeks, it means that thanks to Australia's crop, chefs in the northern hemisphere can now sell dishes including the priced ingredient in their spring and summer.

"We export to 31 countries, and don't have the supply by even half to match the demand from overseas," says Alex Wilson, head of sales at The Truffle & Wine Co - Australia's first commercial truffle farm or truffière, and the single largest producer of black truffles in the southern hemisphere.

"We export around 85% of our truffles and I pre-sell the whole crop," he says.

Truffle & Wine Co is so bullish about the industry's growth that it has ripped up around 80% of its former vineyards in Western Australia to allow expansion of the truffière.

While Western Australia, and more specifically, the town of Manjimup, produces the lion's share of Australia's périgord truffles - there are now 300 farms scattered across the country, and this number is expected to grow.

Colin Carter, vice president of the Australian Truffle Growers Association, says that his members are well versed on how to produce good crops, such as adding limestone to their soils to reach the desired alkaline levels.

Mr Wilson says this knowhow means that the industry in Australia is "leaps and bounds ahead" of more recent efforts to farm truffles in South Africa, and countries in South America. "Australia has a multi-tonne commercial industry, while places such as South Africa are still finding their feet," he adds.

Alongside Australia's successful exports, a small domestic market is also developing. While truffles have long been a menu staple in Europe, the delicate fungus is a more recent addition to Australia's gastronomy scene, so part of the challenge for local growers has been around education and raising the profile of truffles.

"If you mentioned truffles to someone in Australia 20 years ago, most would have assumed you were talking about a chocolate," says Barrett. "Now I'd say 95% of people know what a truffle is, and many are inquisitive as to how they're grown and used."