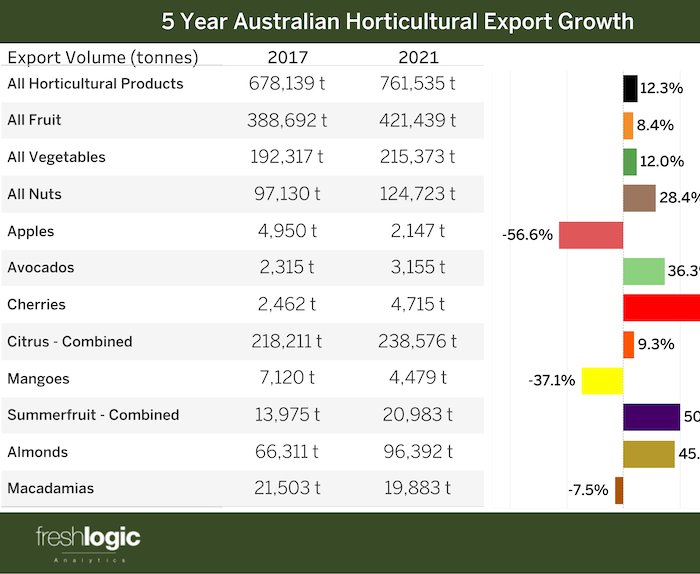 As someone involved in Australian horticulture, it’s probably no surprise to you that export has been a major driver of industry growth over the last few years.

These figures are even more impressive when accounting for challenges to export over 2021.

Due to record freight costs and limited shipping availability, significant volumes grown for export markets were not able to make it to their destination.

Additionally, logistical issues through Chinese ports have also posed a significant challenge for a number of products.

Considering its recent growth performance and an increasingly mature domestic market for many categories, export is now more than ever a vital channel for distribution systems of Australian crops.

In the pursuit of export growth, there are several key advantages that Australia enjoys over its export competitors.

The proximity of a number of key Asian markets is also a significant advantage.

As a point of difference, the quality of Australian produce has also been historically acknowledged by trading partners through higher realised prices.

As an example, across 22 of Australia’s largest target export markets (ATEM), Australian mandarins return 69% above the average market value for 2020. This signals that trading partners recognise that a higher quality product will sell through.

As highlighted by Australia’s recent finalisation of a phytosanitary protocol for nectarines to Vietnam and reduction of tariffs on citrus to India, increasing market access is also allowing for greater diversification of product, reducing market risk and dependence.

Despite these relative export market advantages, with development now moving past the frontier stage, a greater understanding of competitors servicing these export markets will be required.

Of all products exported from the Southern Hemisphere annually, a small group of exporters dominate exports by volume. 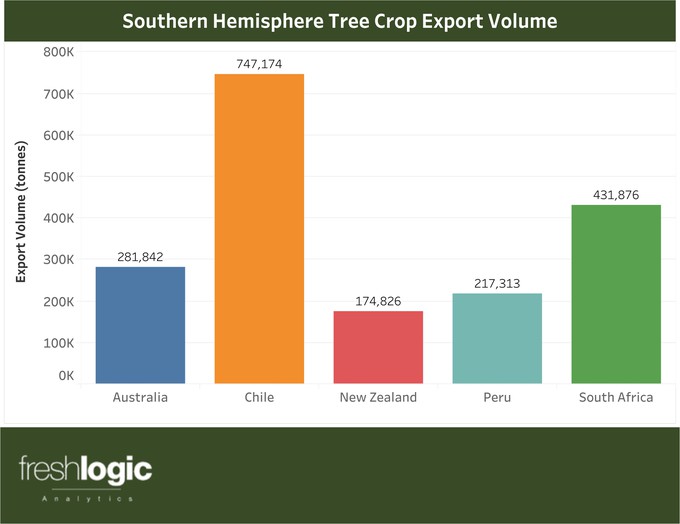 Chile is the largest exporter in the Southern Hemisphere and a key exporter by volume for several temperate tree crops, including pome fruit, cherries, citrus and stonefruit.

This has provided an early window for Australian product in October/November for products such as stone fruit and cherries when seasonality permits. The winter citrus season also follows this pattern, with Chile’s orange season beginning in July.

While Peru has traditionally been an exporter of vegetable lines, including garlic and asparagus, it’s fruit exports have exploded in the 2010s, particularly for blueberries and table grapes servicing the US market.

Seasonally, Peru’s mango (Nov-April) and mandarin (April-November) seasons run for the same months as Australia. Avocados are produced in significant volumes from April to September.

South Africa was the second largest exporter into ATEM trade partners in 2021, with major production of apples, pears, macadamias and oranges.

For oranges in particular, South Africa is by far the largest exporter in the Southern Hemisphere, with significant exports to European nations not captured by ATEM markets.

As a major exporter of oranges to Russia, it’s likely that a proportion of this additional export volume for the 2022 season will be diverted to ATEM, increasing competition within these markets as global trade sanctions continue.

As to be expected, seasonality of New Zealand tree crops mirrors those of Southern Australia. Additionally, with a similar reputation for safe, quality produce, New Zealand also tends to return pricing reflective of this acknowledgement.

Written by James Parry a market development manager for Freshlogic, a market research and analysis firm specialising in fresh food. James’ work assists to connect businesses with information and analysis to make more informed decisions. Get in contact at james.parry@freshlogic.com.au