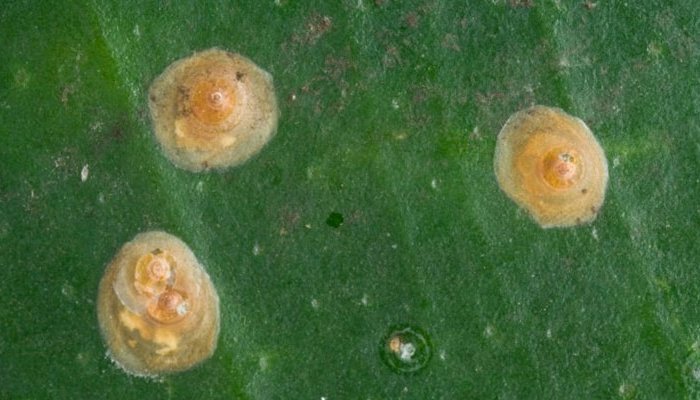 Some insects are like busy bees. Others, not so… Take a mother scale insect for example.

She is born under cover of her mum’s scale. Half a millimetre long, she wanders a few millimetres over the fruit or up the stem, or leaf, then sticks her snout into the soft tissue and starts drinking sap.

She begins to secrete an umbrella-like covering over herself and, as she moults to mature, her legs are smaller and non-functional because she is doesn’t need them to go anywhere. She develops into an almost a two-compartment sack, one of sap and the other, either eggs or babies.

If she is one of the many scale species that reproduce without mating, her living young are squeezed out and, like she did, they make their own arrangements to escape from under the covers and crawl to a new feeding site.

That sort of reproduction is called parthenogenesis; males are not required. The other reproductive variation is when a male of the species (usually hatching from an egg), after two moults while sap feeding, goes through another two moults while changing into an adult with just two functioning wings.

He flies to find a female scale who, after some secret signal, raises her ‘skirt’ enough for him to poke himself under to provide a couple of minutes of excitement. Or not. That’s her life!

Sucking sap, egg-laying or birth-giving is all they do… all day and night. Hundreds of progeny per female and 2–3 generations a year.

Let’s do something sensational… like some simple maths on parthenogenesis:

One female produces around 400 young… all females.

Feeling sorry for yourself yet?

Scale insects are of two main types: soft scales and the hard (aka armoured) scales such as the circular common red scales mainly found on citrus, elongated white louse scales, dark brown San Jose scales to name just a few of many. Their scale is loosely attached and can be levered off if you want to see the cause of it all.

The soft scales include the white wax, pink wax, soft brown, and some black scales. These scales are more convex, even to being hemispherical… and yes, they are soft. Their covering is fixed.

A third variation is the mealybug group, but they live in the fast(er) lane; they are generally larger… and mobile. You need to pause for a while to actually see them in slow motion as they move along a leaf or stem. (See my photograph of one with its guardian ant).

Feeding scale insects produce honeydew. They need protein for egg production and the excess intake is exuded… sweet, sticky and much desired by ants. By providing ants with this juice, the ant is less likely to kill and eat the donor.

The honeydew also runs down over the plant and soon grows a fungus that goes black and is generally known as sooty mould. Not only does this mark and reduce the price you get for your fruit, but the blackness also prevents sunlight getting to the leaves, reducing photosynthesis. You lose again.

Scales are noticeable. They can be on either side of leaves often along the veins, along stems, on the developing fruit and, particularly in winter, the white louse scale can be found overwintering on the trunk of pome, citrus, and other fruit trees.

Heavy infestation on branches can almost totally cover the stem and drastically reduce the translocation of sap down through the bark so that dieback occurs.

They attack many fruit trees, natives, ornamentals, vegetables and flowers all over Australia. There are certainly more species in the tropics but even Tassie gets some problem infestations.

Actually, control is not optional; you need to get on top of scales, or they will keep costing you more in lost profits and increased costs.

They aren’t the easiest insect to kill under that protective wax. Their ‘guardian angels,’ the ants, even help spread the ‘crawlers’ out into new feeding spots. They are really ‘farming’ scale insects like poultry farmers and chooks… only more so.

Biological control is a desirable option, however if your scale infestation is ginormous, chemicals should probably be used first to bring numbers down, then biological control agents can be sensibly considered.

Various ladybirds (both adults and larvae) and green lacewing larvae can make a meal of mealybugs, but hard scales seldom appear on their menu. A couple of Chilocorus beetles are available for a price; their eggs are laid under the hard scale and the assassination job is done quickly once they hatch.

A couple of Aphytis wasps which are all of about 1mm long lay their eggs directly into red and other hard scales. They are also available. There are natural predators for the native scale insects.

When it comes to insecticides to control scale insects and mealybugs, there aren’t many that are registered for use on tree crops. Bayer’s Movento with its active, spirotetramat, is relatively new on the market. A systemic, it gets into the sapstream and circulates directly into the sucking mouthparts of all scale insects feeding over the three or so weeks from the time of application.

Read the label to ensure you are legal and observe withholding periods. I couldn’t find current registration for the older systemics, dimethoate or imidicloprid for use against scales on tree crops other than citrus.

That leaves summer oils or white oils; these are emulsified oils that leave an oily deposit on the plant tissue surfaces and it is meant to seep in under the scales and kill the occupant. They do a reasonable job, but you need to be careful not to cause leaf burn in hotter weather.

Sorry, Py-Bo is not registered against scales, however if you use it for other pests such as aphids, bugs and leafhoppers, at least they die immediately and there is no residue after a few hours of UV light… meaning you can bring in the biological cavalries without risk to them.

Ant control means the scale insects lose their bodyguards. Which is a good reason to do something about ants just before you buy in biological control agents such as ladybirds, wasps, etc.