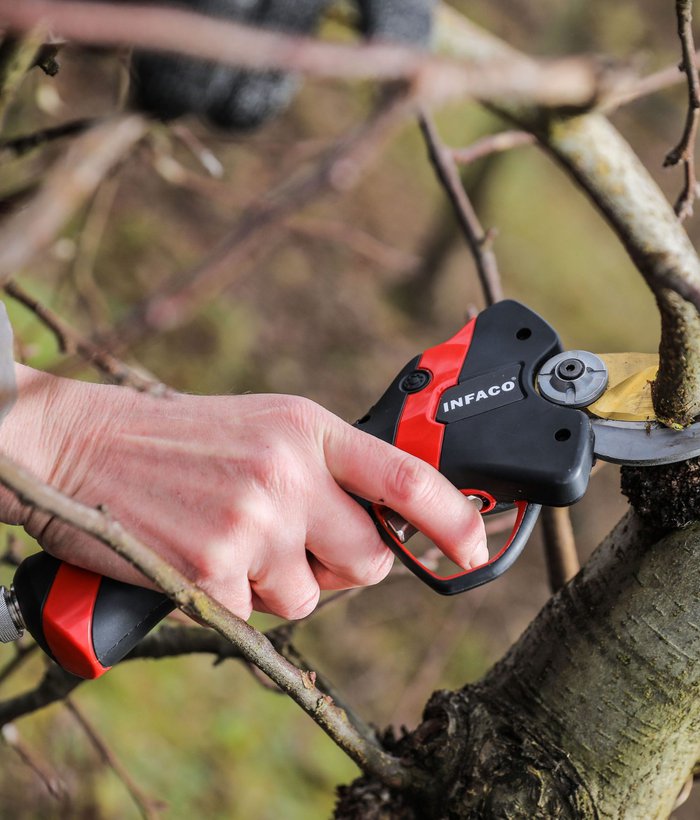 “While looking similar to before, beneath the covers lie major advancements in technology which makes it 20% more powerful and 15% faster,” he said.

“Futuristic battery technology has also led to a smaller and lighter battery.”

This F3020 model introduces two modes of operation. The ‘standard’ mode suits experienced users with blades moving at full speed (which is 15% faster than the previous F3015 model).

‘Soft’ mode is similar in speed to the previous model for those who prefer that blade speed or are learning to prune, Mr Anzelotti said.

“The shears come with three interchangeable heads, small, medium, and maxi to suit the width of the vine or wood you’re pruning. An optional extension pole allows the shears to be used up in the tree canopy with ease.”

The 3020 features a new battery, vest and cable, designed to significantly improve the unit’s ergonomics. The cable now extends over the shoulder and along the arm, reducing any dangling cables.

“The new battery only weighs 698gm (down from 950gms) and is comfortably worn on the ergonomic harness – or is now small enough to place in your pocket.

“One battery will ensure 10 hours of continuous operation, so a full day’s work can be achieved without interruption.

“Operator safety is important and the Electrocoup comes with a wireless electronic safety system (DSES) as standard.

“This system utilises a conductive trigger so that if the cutting head touches the opposite hand (bare or wearing a glove), the pruning shear blade opens instantly. The unit now features a switch that can turn off the safety system in case the unit is working in wet or damp conditions.”