Katabatic drift explained and how to avoid it 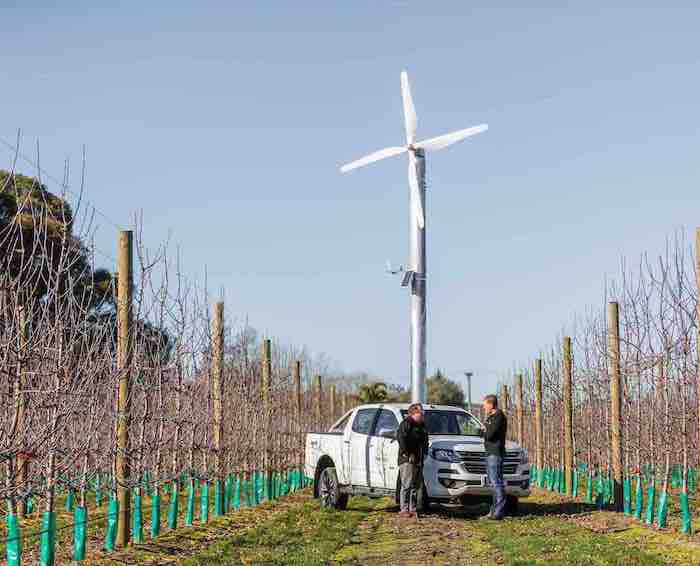 Frost Fans have become indispensable in protecting a range of tree crops in Australia and around the world.

Australian sales manager for Australian Frost Fans, Ian Mason gives some valuable advice on how to locate frost fans and set up your orchard for best effect.

Mr Mason said frost fans work best during radiation frosts when there is a strong inversion layer of warmer air.

Radiation frosts are characterized by clear skies, calm conditions, and daytime temperatures in in excess of 0°C. The earth absorbs heat from the sun during the day and releases it into the colder atmosphere at night. The heat loss is greatest just before dawn and this is usually when the maximum danger of frosts and crop damage occurs.

This nocturnal release of heat creates an ‘inversion’ layer of warmer air, which can be found from 10–50 metres above the ground. During a radiation frost, a frost fan is used to draw down the warmer air in the inversion layer and blow it into the orchard.

Katabatic drift, also known as ‘cold air drainage’, is a drainage wind that carries high-density air from a higher elevation down a slope under the force of gravity. This occurs in much the same way as water would flow off the land.

“Even in very flat areas, the drift will be influenced by sloping topography many kilometres away. The drift will also follow rivers and water courses,” Mr Mason said.

“During a radiation frost, katabatic drift may be barely noticeable, but it will still influence the coverage shape of a frost fan and how best to locate it in your orchard or vineyard.”

Why is katabatic drift important?

“Site selection is still the key to lowering frost risk,” Mr Mason said. “Crops become more susceptible to frost damage when they are located at high elevations; in low lying areas where cold air settles; and next to obstacles to air movement such as tall vegetation, levees and buildings.”

Mr Mason said ideally, any obstacles that inhibit down-slope drainage of cold air from a crop should be removed. These obstacles might be hedgerows, fences, bales of hay, or dense vegetation located on the downslope side of the field.

Land levelling can sometimes improve cold air drainage through a crop so that incoming cold air continues to pass through the crop. Row lines in orchards and vineyards should be oriented to favour natural cold air drainage out of the crop.

How does this affect the coverage shape of a frost fan?

Due to the effect of the drift, Mr Mason said frost fans which rotate 360 degrees around the tower cover an elliptical shape, not a circular shape.

“A FrostBoss Frost Fan will cover 6–8 hectares depending on the specific site conditions and inversion strength. Typically, the fan will blow 250m downstream with the drift, 90m upstream and 140m to each side.”

How to determine the direction of the drift?

Mr Mason said the direction of the katabatic drift needs to be determined before sunrise, because it can change direction after sunrise. These studies need to be done on nights with radiation frost characteristics, but not necessarily when the temperature is sub-zero.

Smoke bombs, small fires or balloons filled with helium can all be used to study the direction of the drift.