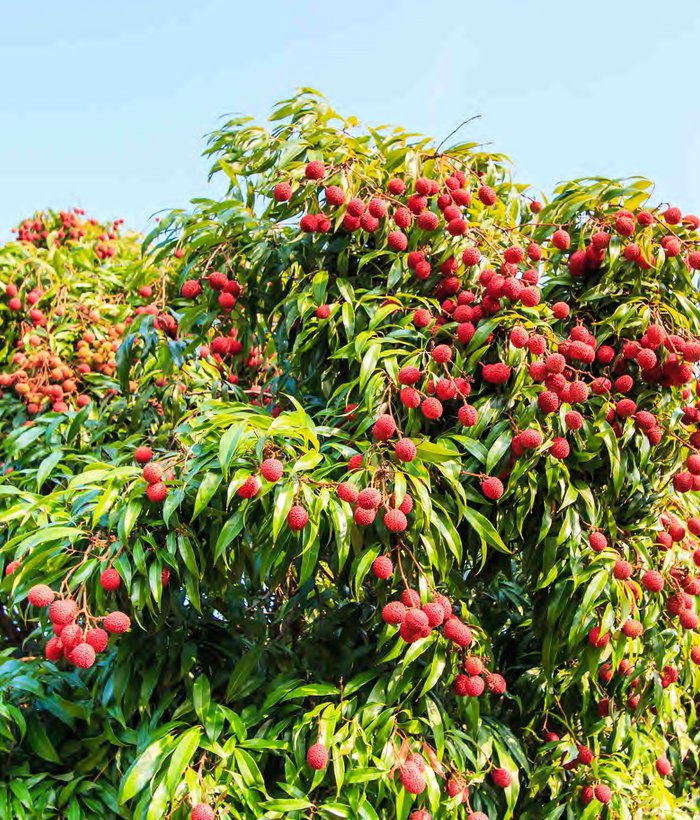 Lychee flowers are generally known to be very attractive to pollinators – the copious amounts of nectar and pollen they produce can draw in flower-visiting insects and birds from far and wide. But this doesn’t necessarily mean that growers can ignore pollination.

The Brisbane-based team at Plant & Food Research Australia has been investigating pollination of several tropical tree crops, including lychee, to ensure these industries are maximising their pollination, and prepared for changes in pollination management if the Varroa mite parasite of honey bees was to become established in Australia.

Finally, the tree moves into another male phase (‘M2’). This phase does not set fruit, but the pollen it produces is generally more viable than that of ‘M1’ – good lychee pollination is therefore dependent on overlap of cultivars so that there is M2 pollen available at the same time that F flowers are receptive.

Four farms in the Sunshine Coast region and one farm in Far North Queensland were looked at. Altogether, more than 16,000 flowers were observed. At all sites, hand pollinating resulted in a higher final fruit set rate, with some fruit set rates nearly doubling .

The highest final fruit set recorded was 17% – a high set rate for a mass-flowering tree. This rate was observed when the cultivar ‘B3’ (‘Kwai Mai Pink’) flowers were hand cross-pollinated with pollen collected from M2 flowers of ‘Tai So’.

These results suggest that many lychee farms in Australia may currently have a pollination deficit, and the greatest yields can be accomplished with cross pollination between cultivars. This can be achieved by planting cultivars with compatible timing of flowering, and by ensuring adequate pollen movement by managing pollinators.

Under managed pollination, as more and more flowers are pollinated, tree nutritional constraints may limit the ultimate potential for yield gain over an entire tree. However, data from other mass-flowering crops, including almonds and macadamia, suggest that even while the per-flower set rate may diminish as more and more flowers are pollinated, good pollination still results in higher yields per tree. Even a small percentage increase in fruit set rate can add up when applied across an entire orchard.

To manage pollination, honey bees are typically deployed on-orchard during flowering. In several lychee-growing countries their use has been shown to enhance yields and quality.

A honey bee stocking rate of 2.5 hives per hectare is recommended and when possible, hives should be distributed about the farm to encourage even coverage of bees throughout the crop. Pollination with honey bees is not without its challenges – lychee flowering can overlap with several other pollination-dependent crops in Eastern Australia – which may lead to competition for rental of honey bee hives.

Honey bee management for pollination has been especially complicated by the effects of bushfires in recent years. Honey bees are vulnerable to the parasitic mite Varroa destructor, which has been prevented from establishing in Australia thus far.

If it makes its way here, it will reduce the number of wild colonies of honey bees and increase management costs for beekeepers. This pest substantially altered honey bee management and pollination practices in New Zealand in the years following its accidental introduction in 2000.

The final challenge for honey bees is hail or bird netting, frequently used to protect lychee crops in some growing regions. Similar netting has been shown to negatively affect honey bee colony strength in other crops. However, initial trials undertaken by Plant & Food Research in 2019 have shown that the strength of hives in covered lychee blocks did not result in the reduction of the strength of those hives.

Australian native bees seem to be particularly important. Stingless bees (Tetragonula sp.); are small social bees which are available as managed pollinators in most places where Australian lychees are grown. By measuring pollen transferred onto virgin lychee flowers after stingless bee visits, we have been able to confirm that these small-bodied bees do transfer pollen between lychee flowers.

Several other species of solitary native bees (including Homalictus) also transfer pollen and they occur in great numbers on some farms. Surveys of flower-visiting insects in lychee farms across three major regions in 2018 and 2019 suggest that numbers of solitary bees are highly variable between regions and between years in a single region. We are working to better understand the biology of these bee species and how best to encourage their consistent presence in orchards.