Animal carcasses and their flies could be 'the new bees' 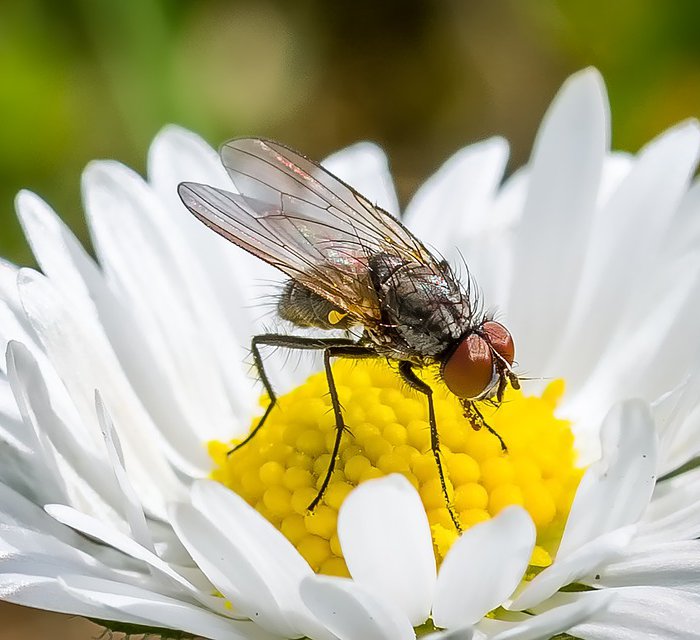 With Australia's multi-billion-dollar agriculture sector reliant on bee pollination, a stinky technique could diversify other insect pollinators to favour crops.

University of Western Sydney researcher Jonathan Finch has been placing fish carcasses across a large commercial mango orchard near Katherine in the Northern Territory in the hope of studying fly pollination behaviour.

He said with exotic disease incursions and toxic chemicals presenting a constant threat to commercial bee populations, it was important to understand the pollination potential of other insect species.

"We know that flies can be just as efficient as honey bees in transferring pollen for various crops," he said.

"But the key issue is that flies often aren't as abundant as honey bees and other insects like that.

"So if we can find ways of increasing their abundance we can have flies which are just as efficient as honey bees at pollinating … all sorts of crops."

While the animal carcass technique has been used by farmers for many years, researchers are only now starting to use the method to help understand the impact fly pollinators have on crop yields.

Mr Finch said it was an important but challenging field of research.

"It is pretty bad. I've not got a particularly great sense of smell and I'm pretty grateful for that," he said.

"It's pretty stinky, but the flies do love it.

"Fish in particular, seems to be their preferred thing. They came from miles away to get at some fish that we left out."

Researchers in Western Australia are also starting to investigate the role flies play in crop pollination.

Department of Primary Industries and Regional Development entomologist David Cook said there had already been some encouraging results in blueberry crops.

"We had a quarantined glasshouse where we excluded all insects, with a whole lot of plants, and one next door identical where we introduced a local, endemic blowfly," Dr Cook said.

"At the end of the six-month trial we actually found that those flies were very good at pollinating the berries.

"We got twice as many berries over the same time period, and we actually got bigger berries."

Pollination on the farm

Getting pollination right is particularly critical in seed cultivation, before crops are even put in the ground.

Rowena Petrie's family has been growing and exporting seeds for more than 40 years on their farm in Mudgee, New South Wales.

"It's really important for us to get good seed set, so we bring in pollinators for our crops," she said.

"We bring in bees for some crops, but for others we have to look outside the square and we bring in flies.

"Things like beetles and flies will pollinate even the worst-smelling flowers."

Ms Petrie said they had been collecting nearby roadkill to help attract flies to their "smelly" onion seeds.

"We get roadkill, predominantly kangaroos, we halve and quarter them and lay them amongst the rows of onions," she said.

"We can also use a spray which is a bee attractant, but they really don't smell that great. So that's why we have to use alternative pollinators such as flies."

While the NT and WA researchers agreed flies could play an important role in crop pollination, there is debate over the value of using animal remains as an attractant.

Dr Cook said he had his doubts about the overall effectiveness of the method.

"You've got no control over what's going to come out of that carcass — if it's the right species at the right time," he said.

"And from a food quality health and safety point of view, you really want to bring in flies from outside that have been sterilised or eradiated so you know they're not going to continue on to be a problem in that area."

However, Dr Cook acknowledged there was huge potential for the horticultural industry to mass-produce sterilised flies for on-farm pollination.

"The horticultural industry has recognised this as a major issue, that they need to have some alternatives or back-up plans to replace bees, or to add value to what bees already do," he said.

"Flies have been mass-reared around the globe for different situations, it's not an impossible task at all.

"You just need to tailor for what fly species you've got and what numbers you need to release.

"If you could find a fly species that is throughout the world, proven as an effective pollinator for certain crops, your market access could be enormous."