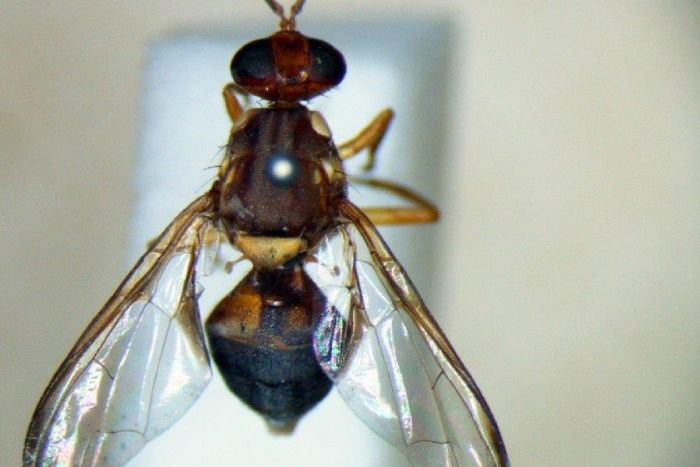 Fruit fly larvae have been detected in Tasmania on a mango imported from Queensland.

The infected fruit was found in Devonport during a routine inspection at a Biosecurity Tasmania control centre.

It was imported in a shipment of more than 1,000 trays of mangoes that arrived on January 1, Lloyd Klumpp, Biosecurity Tasmania general manager, said.

"This is not uncommon, it happens from time to time and it has been controlled," he said.

"The other mangoes in the shipment have been contained and or destroyed."

In 2018, adult flies were found in traps on Flinders Island sparking a range of control measures to contain the outbreak.

Larvae were also found in fruit in Spreyton and George Town.

Strict biosecurity control zones implemented in 2018 limited the movement of fresh fruit from some of Tasmania's prime horticultural production areas unless it had been treated with methyl bromide or been kept in cold storage for weeks.

Tasmanian fruit exporters have built businesses with the island's pest-free status as a competitive edge and the shutdown affected export markets and caused huge financial losses.

Minister for Primary Industries, Guy Barnett, said since then no fruit fly has been detected in Tasmania.

"It's proof the current procedures are working," he said.

"There's no such thing as zero risk, there's always a chance a piece of fruit can get into the state."

He said he was confident this was not an outbreak and would not affect the state's exports.