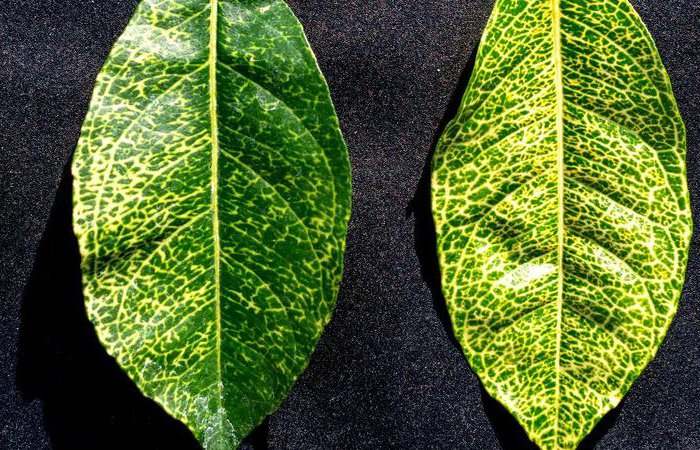 Scientists are hoping the RNA of an obscure infection can one day be used like a Trojan horse to deliver life-saving treatments to citrus trees.

The infection, citrus yellow vein disease, was discovered 64 years ago in Riverside and has never been seen elsewhere in the world. Decades later, UC Riverside researchers have finally unraveled the associated pathogen’s genetic codes - a significant step toward harnessing its unique properties.

A paper describing this work was published recently in the journal Frontiers in Microbiology. It opens the door to testing whether this apparently benign infection could be used as a vehicle to transport antibacterial and antiviral agents into citrus plants’ vascular systems, where infections usually take place.

Citrus crops face a highly uncertain future due to citrus greening disease. In the past decade, the disease has caused a 72% decline in oranges used for juice, and a 21% decrease in the American fresh citrus fruit market. Growers in other parts of the world are similarly affected, and it continues to spread unabated.

Though there are promising treatments and disease-resistant hybrids being developed, none are yet commercially available.

Cells use RNA to convert the information stored in DNA into proteins that carry out different functions. Yellow vein disease is associated with small, independently mobile RNA, also called iRNA, which spreads through a plant’s vascular system. This spreading mechanism could be a new way to send treatments for citrus greening disease or other diseases into plants.

The story of this promising research starts in 1957 with Lewis Weathers, a UC Riverside plant pathology professor.

“That color was recognised as a disease, and samples of it were deposited at the Citrus Clonal Protection Program disease bank where it was waiting for us to study decades later,” Mr Vidalakis said.

Based on Mr Weathers’ experiments, it did not appear as though the disease is carried by any animal or other microorganism, Mr Vidalakis said.

“We think it was introduced into the limequats in a single event, and once those plants were destroyed, it never spread to other citrus in California.”

Researchers have learned, however, how the disease spread between cells in infected plants. The iRNA disguises itself with plant proteins that lets it pass through cellular connective tissue. This ability to travel inside citrus trees may allow the iRNA to send protective molecules into noncitrus plants as well, including grapes, olives, and cacao.

Yellow vein disease iRNA is also surprisingly small, even for a microscopic organism. Plant viruses typically have four to 10 genes on an average, each with at least one function. The iRNA of this disease has only one functional gene.

“The iRNA is amazing because it’s able to manipulate plant cells to help it replicate, despite having only one functional gene,” explained Kiran Gadhave, a UCR microbiologist, corresponding author of the paper, and lead researcher of the iRNA project. “In addition to its potential therapeutic value, it’s just a scientific curiosity. This is as small as it gets.”

Though they believe the pathogen to be benign, the research team is doing additional testing to make sure it won’t affect fruit quality, quantity, tree height, or other markers of health. Symptoms in greenhouse-grown trees were mild. Now this is being tested in a field trial in the living laboratory at the UCR Agricultural Experiment Station AgOps.

“The support of the Citrus Research Board and our close collaborations with the University of Maryland and Silvec Biologics are proving to be crucial in taking this technology from lab to the farm,” Mr Gadhave said.

One day, iRNA could be used alongside gene editing technologies like CRISPR, in which cells are trained to recognise and destroy nucleic acids from invading plant pathogens. There are challenges with both methods that need to be overcome first, like managing unintended effects, costs, and efficient delivery.

“The common limitations of both approaches can be overcome by matching their strengths, the same way we integrate different disease management solutions,” Mr Gadhave said.