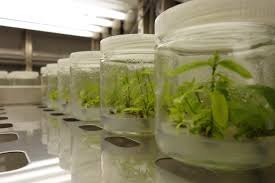 Plant tissue-culture (TC) is a cost-effective means of plant propagation that has been widely applied in the horticulture and forestry industries. It is a principal technique for propagating a number of herbaceous crops such as banana and strawberry, and has been successful with tree crops including apple, apricot, cherry and peach (Mohamed-Yasseen, 1993; Dobránszki and da Silva, 2010; Balla and Mansvelt, 2013; Carrasco et al., 2013).

The process of plant tissue culture begins with collecting explants, such as buds or shoot tips, from a high-quality field selection (mother-plant), cleaning and placing these on a sterile, species specific nutrient-rich medium in a controlled environment growth room. By providing the perfect conditions for shoot and root growth, these explants will multiply into new plants that are genetically identical to the mother plant. For some species, hundreds to thousands of clonal plants can be produced from a single shoot-tip, making this process extremely high-throughput and resource-effective.

The growth of the avocado industry has increased the demand for plants and placed increasing pressure on traditional propagation capability. We are aware that there are often extended waiting periods for nursery trees, especially on the highest quality rootstocks. This is particularly problematic for propriety rootstock selections such as DUSA, which must be clonally propagated – a technique that is time-intensive and rate-limited by a number of factors including season (nurse seed-dependency), nurse-plant graft-take and rooting strike rate.

Tissue culture has the potential to address problems in avocado propagation though large-scale propagation of clonal rootstocks with no reliance on seasonally-restricted and heterozygous (nonuniform) seed. Importantly, as the plants are raised in a soil-free, sterile environment, tissue culture can also produce planting material free from pests, fungi and bacterial disease. Given these advantages, researchers globally have been working on avocado tissue culture for over 50 years, however, no-one has been successful using mature tree material (Hiti-Bandaralage et al, 2017).

At the Queensland Alliance for Agriculture and Food Innovation, The University of Queensland (UQ), we have developed the world’s first successful pipeline for avocado tissue culture. With ARC-Linkage funding, our team of researchers, growers and the Queensland Department of Agriculture and Fisheries demonstrated complete proof-of-concept from lab to orchard. Our system can produce up to 500 clonal plants from a single shoot-tip in culture within 8-12 months. Now, with funding from an Advance Queensland Innovation Partnership (AQIP), we have teamed with Central Queensland University (CQU) and the University of Southern Queensland (USQ) to deliver this technology.

Our first success with avocado tissue culture was achieved with the commonly available rootstock Reed and is being adapted for other desired rootstocks including Velvick. The process starts with the introduction into culture of a single shoot tip from a mature tree. This is multiplied into many shoots, followed by root formation, and nursery hardening for grafting. For Reed we can produce 500 rooted shoots from a single shoot tip, with 100% rooting success. As such this system is demonstrated to produce clonal plants at a scale many orders of magnitude greater than traditional propagation practise.

We are now in the stage of field trials for our first tissue cultured Reed rootstocks grafted with Hass scion, and have other cultivars including Velvick and Zutano in the pipeline. To our knowledge, these are the first field-plantings of tissue cultured avocado in the world.  Although Reed is Phytophthora susceptible and not the favoured cultivar for most growers, these trials allow us to assess the potential for tissue cultured rootstocks for commercial avocado production, while we continue to develop technology for the more desired cultivars.

To date, our analysis shows no significant differences in the growth of our TC rootstocks alongside conventional seedling rootstocks at this location. This early data suggests that the immediate growth and performance of TC rootstocks is equal to that of commercially available plants of the same cultivars in Australia. We will soon be collecting data from our WA and Far N Queensland sites, to assess the stability of this performance across locations. We look forward to quantifying the results for flowering and fruit yield in the coming years.

The inefficient propagation of avocado plants for commercial production currently represents a bottleneck for intensification of avocado production globally. We present here the world’s first avocado tissue cultured rootstocks, able to be produced in large scale from a very small amount of starting material and free from soil, seed and seasonal constraints. Our early field data suggests that TC rootstocks grow similarly to conventionally propagated rootstocks within the first year of planting. This shows promise for delivering a breakthrough technology to address the industry challenge of plant demand, to support future industry expansion.