Beekeepers confident industry can keep up with demand for almond pollination 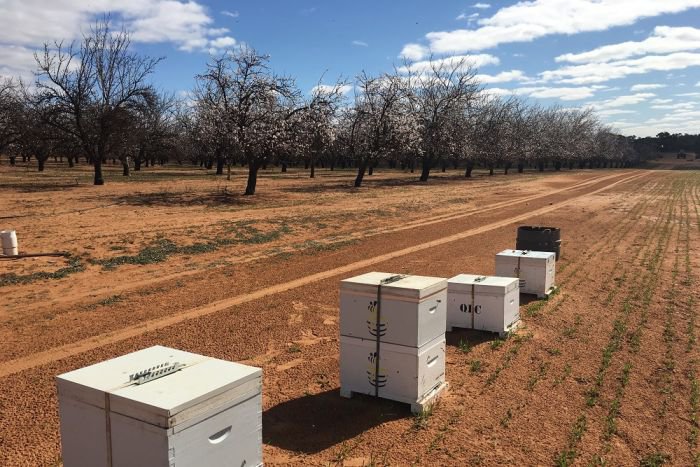 Hives from across the country have been trucked to South Australia's Riverland region for the August pollination season.

Paringa beekeeper Robert Johnstone estimated there were around 100,000 hives in the Riverland at the moment.

But he said it had been a particularly tough year for apiarists, and bee health and numbers were low.

"If there's no forage around, they're using up protein out of their own bodies … so the bees are in a weakened state," he said.

"If drought conditions stay like this it's going to be a bit of a strain on beekeepers to maintain their hives and keep the levels up."

Executive member of the South Australian Apiarists' Association and Tintinara beekeeper Ben Hooper said the industry had been under pressure to maintain strong bee health.

"Due to the severe heat event we had at the start of the year, it's placed a lot of stress on beehives and … the continued dry led to a lack of nutrition."

Earlier this year, there was concern from almond growers about the declining bee population and whether that would lead to a crisis for pollination industries.

But Mr Hooper said he was certain Australian apiarists would be able to sustain the growing almond industry.

"We are growing, we've had an increase in hive numbers here of around 8,000 at a commercial level in South Australia," he said.

Figures from the Almond Board of Australia show there are currently 45,000 hectares of almond trees in the country, with a further 10,000 hectares waiting to be planted.

The Almond Board expects the industry will need a further 75,000 hives in the coming years to supply the maturing trees, increasing the number of hives in Australia to 300,000.

"There's been a really large uptake of beekeeping as a hobby … that's the breeding ground for new commercial beekeepers," he said.

But Mr Hooper said apiarists — new and old — needed space for the bees to forage outside of pollination season to keep sustaining the industries.

"To supply the strength of bees that the almond growers really need, we do need some expanded access to natural resources throughout the state," Mr Hooper said.

"South Australia is lagging, undoubtedly, the furthest behind in that we really only have over 200 sites on public lands that are now available to us as an industry, and that puts us at a significant deficit of about 95 per cent.

"For almonds, the bees are stocked in at such a heavy rate to make sure that crop sets its fruit at a high level for that short period of time. But there's the other 11 months of the year that we need to keep the bees healthy, and that comes back into that expanded access issue."

Mr Johnstone agreed, and said very few apiarists could keep their hives in South Australia outside of pollination season.

"Here, in South Australia, I remember I tried to get access one time and they said, "Oh, there are no sites available and none in the foreseeable future'," he said.

"They'll bring their bees here, but they won't be able to keep them here — that's the problem."

Continued bee supply necessary for almond industry's future
Jackie Casaretto co-owns The Almond Farmer in Taylorville, and said it was important to get the next generation involved in beekeeping.

"There are a lot of almonds going in the ground so I just really hope that the bee industry can sustain the growing almond industry," she said.

"We definitely need to get future generations involved in the industry so it continues to grow and can keep up with the almond growers."

Ms Casaretto said having a small business had been an advantage because apiarists preferred to send their hives to properties that would have limited interaction with other beekeepers' hives, lowering the risk of spreading diseases.

"If we were to grow any bigger, it would be a concern — where would the bees come from?" she said.