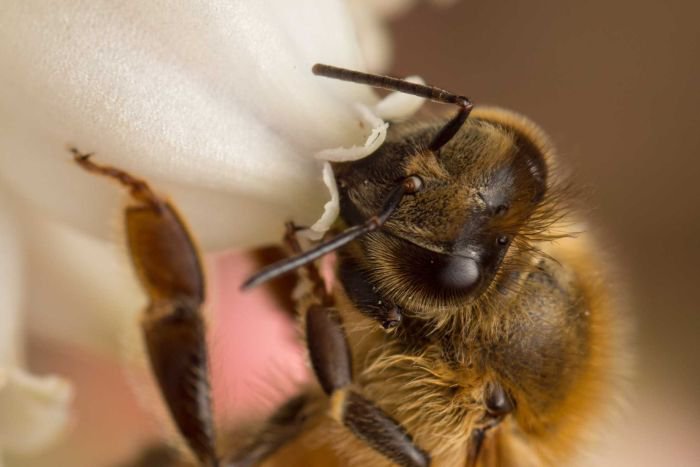 The answer is in the detail
"You can stand there and watch and think that one is more abundant than the other," UNE's Romina Rader said.

"But if you don't measure how much pollen has been transferred by each one then you can't tell if a visit influences yields."

That measuring can be quite painstaking with students, Costa staff members and Dr Rader standing around watching the flowers waiting for a visit.

"We time the visit to see if its duration has anything to do with the efficiency of the visit," Dr Rader said.

"Then we take the stigma from the flower and then mount the pollen on a slide and count it."

In the case of blueberries, the flower is quite small, lending to the thought that the smaller stingless bee can work itself in further and emerge with more pollen.

Results show there is little difference
However when the results were collated, there was not much difference between the stingless bee and the honey bee in the amount of pollen that had been transferred.

"The stingless bee can actually crawl in and walk around. So upon first appearance it would appear they would be more efficient," Dr Rader said.

"But the honey bee is really good because they have really hairy heads.
"They can stick their head into the flower and the pollen gets moved around when they drink the nectar."

Getting the native stingless bee comfortable to pollinate the blueberries included making sure their manufactured hives were marked in a manner not to confuse the bees.

The hives are located on poles approximately 15 metres from the end of the bushes. They are then spaced again around 15 metres from each other, around two metres above ground, following advice from bee experts. This is to avoid possible confrontation amongst the native bees.

"The colonies may start fighting but despite this at the beginning we noticed the colonies would still fight each other," said Costa's senior horticulturalist, Maurizio Rocchetti.

"To overcome this, different coloured triangles were placed on the front of each hive just above the small opening the bees few in and out of.

He said they introduced different colours and shaped hives so the bees could to help them identify their home when they returned.

While the degree of successful pollination is being measured, if the stingless bee is as efficient as its European counterpart, it will help if the dreadedvarroa mite ever takes hold.

While it has been detected in Australia, so far the parasitic pest has not been in the numbers that have wreaked havoc overseas amongst honey bees.

It is unlikely to jump over from the European honey bee to its indigenous cousin.

"If varroa does come into Australia it will lead to major changes in honey bee management," Dr Rader said.

"The feral honey bees would probably die out in wild locations.

"Hives would have to be intensively managed by beekeepers to maintain pollination services. So the stingless bee would become particularly important."