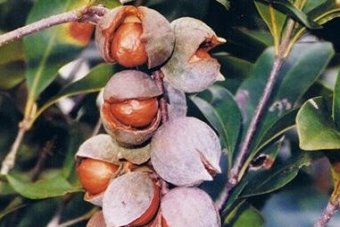 Thirty-seven new trees of the endangered macadamia jansenii species have been found in Bulburin National Park, south of Rockhampton.

Until September last year, the Macadamia Conservation Trust of Australia thought only 90 of the trees existed in the wild.

"It was just a matter of looking for specific details like the colour of a new flush of growth and the habits of the known plants we had," he said.

"I just looked in tributaries of Granite Creek and worked our way upstream, and I think the first group of trees I found was about roughly five kilometres from the first population."

Jansenii, the smallest of the macadamia species native to Australia, produce bitter little nuts on an evergreen plant.

The species are thought to be the hardiest of the four native to Australia, as they live the furthest north.

The discovery was nostalgic for Mr Sarnadsky, who is a keen naturalist in his spare time.

In 1983, he was one of four men who accidentally stumbled across the new species of native macadamia, while on a bushwalk near Agnes Water in Queensland.

The men met through their local society for growing Australian plants in Bundaberg.

"We were a group of people that had an actual interest in rainforest plants and natural history in general," Mr Sarnadsky said.

"The day that they were found, we had been up on top of the range most of the day and then descended down back towards the Bruce Highway.

"We pulled up there and we walked up that particular creek because it was a nice little creek.

"That's when Ray found them."

Mr Sarnadsky said looking for new plants was hard, but he did it out of passion.

"It's a good drive from home … and it's a rough place to take your car into and there's a lot of strenuous walking through vine scrub," he said.

"So yes, I've got a personal commitment to it."

The new discovery has come as a great comfort to the Australian Macadamia Conservation Trust.

The only living wild population of jansenii are in Bulburin National Park, an hour south of Miriam Vale in Central Queensland.

Since the early 2000s, the species have been listed as endangered.

Denise Bond, the executive officer of the Macadamia Conservation Trust, said the group were extremely concerned about the species during the emergency.

"The fires were within 10 kilometres of the jansenii population and that's the kind of catastrophe that we're scared of," she said.

"If it had burnt up the valley they could well have burnt the entire population."

The weed known as cat's claw creeper is another threat to the species.

As such, efforts to preserve the species have been implemented.

Cuttings from 42 plants were taken under licence from the Queensland Government and planted at Gladstone's Tondoon Botanic Gardens.

This 'insurance population' are now more than five years old and healthy.

Of the four native Australian macadamia species, three are considered vulnerable and one endangered.

Ms Bond said that many people find it difficult to comprehend that macadamias were under threat, considering how many were available on supermarket shelves.

"One of those characteristics is producing small trees rather than big trees that are harder to manage in orchards," she said.

"So, I think that's one way jansenii may prove useful to the industry.

"But also, it's just valuable as an individual unique species of the Australian biodiversity."