Who loses in changes to horticultural labour rules 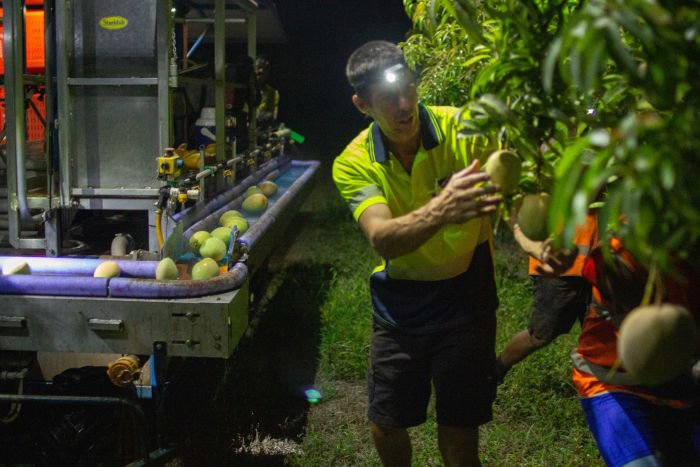 Farmers and some workers say they are losing money because of changes to the award wage for casual horticultural employees.

Since April 2019 farmers have had to pay their casual workers overtime rates if they worked more than 38 hours a week (averaged out over an eight-week period), along with penalty rates to those working more than 12 hours a day or night-shifts.

The new rules were strongly opposed by farming groups when first flagged in 2018, with warnings that some farms would be forced out of business.

The Northern Territory's mango industry — worth more than $90 million, according to the NT Government — has just finished its first harvest operating under the new rules.

One of Australia's largest fruit companies, Piñata Farms, said it has been hit twice as hard by the changes to award, due to long work hours and night harvesting.

"We have to pay a 15 percent premium to pick at night-time, when it is better for the workers and the fruit," the company's Stephen Scurr said.

"That extra money has to come out of our pocket — consumers aren't going to pay the extra 15 percent, so at the end of the day it is the grower who wears the cost, no-one else.

"We can't seem to be able to put our prices up and get that return back — [the produce] just doesn't get sold.

Many NT farmers ABC Rural spoke to tried to adjust the hours of their employees so they did not hit work past the threshold for overtime.

For the past few years, Calisto Dos Santos De Jesus has travelled from his home in Timor Leste to Darwin to pick mangoes and earn as much money as he can in a couple of months.

But in the season just finished, he estimated he would earn around $5,000 less than the previous harvest because his employee limited his work to no more than 38 hours per week.

"That is meaningful for us because some people [use their wages] to send their kids to school, some people run a small business, some others build houses for their family," Mr De Jesus said.

"If we got more hours, that would be great for everyone, but we can't do anything about it because it's the Government's decision."

"But it's really hard on the staff that we've had long term, and we've got a lot of staff that have been here now for 10 or 12 years [who] they love doing what they're doing," he said.

Since the change to the horticultural award, Top End mango farmer Ian Quin has tried not to let any of his employees work overtime.

"Once they hit 38 hours they are stopped," he said.

He said he wished he had the money to pay for overtime work, but he could not afford the wages.

"I think anyone in the agricultural industry would be in the same position," Mr Quin said.

"The margins just aren't there."

He said the terms of trade for mango farmers had not improved alongside wage increases over the past 30 years.

Senator Murray Watt, the shadow minister for northern Australia, said the issue of paying overtime would not exist if there were enough available workers in the horticultural industry.

"I imagine the mango farmers are only having to contemplate having people work overtime because they simply can't get the number of people they need," he said.

"That is the nut we have to crack."

Mr Watt said horticulture workers deserved to be paid overtime if they did more than 38 hours.

"I think to expect people to work more than 38 hours in extremely hot, extremely humid conditions, they probably deserve a bit of a premium for doing so," he said.

Piñata Farms' Stephen Scurr rejected Mr Watt's argument, saying while it was difficult to get Australians to pick fruit, there was ample access to Pacific Islanders through the Seasonal Worker Programme.

"To bring 50 or 60 workers over when we only need them for six or eight weeks means we would need a lot of accommodation for a short period," Mr Scurr said.