What triggers biennial bearing in apples? 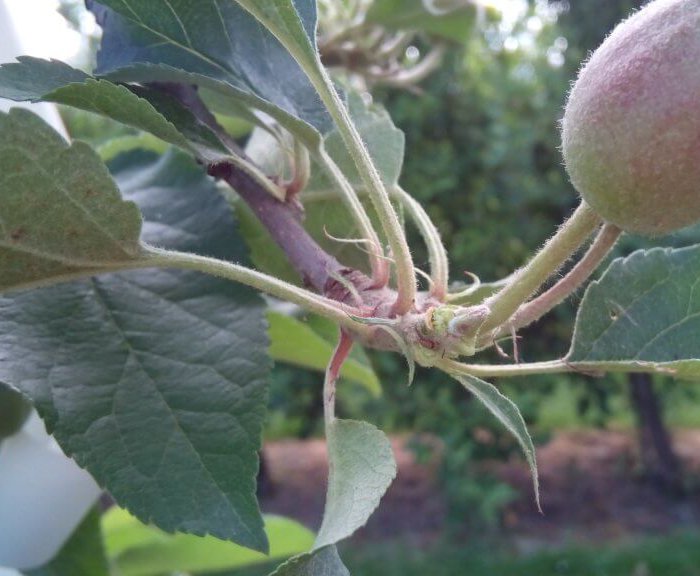 Biennial bearing in apple induces variable yearly yields. Growers usually manage this by removing excess flowers and fruitlets from ‘on’ trees with heavy fruit loads to increase fruit size in the current season and the amount of bloom in the subsequent season.

While moderately effective, this horticultural tool is extremely time-consuming and costly, and yields can still be considerably reduced. Industry profitability would increase if more consistent crop loads could be achieved for those apple varieties that are characterised by ‘on’ or ‘off’ years. Therefore, Australian and German researchers from the Productivity, Irrigation, Pests and Soils (PIPS) program are undertaking a five-year project to better understand the underlying processes that cause biennial bearing in apples trees.

Specific research goals are to induce regular and uniform flowering by manipulating gene expression levels and to identify potential molecular markers for targeted selection of genotypes without the trait ‘biennial bearing’ in breeding populations.

It is estimated that about 30 per cent of the worldwide available commercial apple cultivars are susceptible to some level of biennial bearing. Given the $500m+ AUD annual value of Australian apple production, alleviating the impact of biennial bearing could potentially increase industry revenue by about $50m AUD. Yarra Valley orchardist and project partner Kevin Sanders agrees: “We lose 20­­­–30 per cent of our income every year due to biennial bearing,” he said. “The ability to even out biennial bearing would be extremely valuable and assist with industry wide planning.”

The research project uses new plant research technologies to reveal the presence and quantity of “differentially expressed” genes (transcriptomics), proteins (proteomics) and small-molecule chemicals such as sugars, amino acids, flavonoids or lipids (metabolomics) in an apple bud sample at a given time. Functional genomics then describes gene, protein and metabolite functions and interactions.

To study the plant mechanisms associated with biennial bearing, apple spur buds from the strongly biennial-bearing cultivar Fuji, clone Raku-Raku, and the regular-bearing cultivar Gala, clone Galaxy, were sampled at weekly intervals for up to 12 weeks after full bloom. Both cultivars were grown in Germany and adjusted to ‘on’ and ‘off’ cropping levels to establish ‘heavy’ and ‘no’ fruit loads, respectively.

Studies on biennial bearing in apple necessitate identifying exactly when the bud commits to flower formation. A time series of microscopy analysis of apple buds determined the onset of structural changes within the bud tissue and thus the time of transition from a vegetative to floral bud. Samples collected prior to this time point were then used for the omics-studies, since it is of particular interest to determine any developmental changes that lead to flower formation. In general, apple buds can be routinely evaluated with standard microscopy procedures; however, they are time-consuming and depend on meticulous and patient execution. Sample size also needs to be considered due to the variability among buds within the tree.

A comprehensive statistical analysis of the Fuji transcriptome dataset revealed around 6000 genes that were significantly different between ‘on’ and ‘off’ trees at the initiation of flower bud formation and during three weeks prior to this event. The Gala dataset is not yet fully analysed, but it is expected that a similar number of differently expressed genes will be found. Functional gene analysis is still ongoing and involves the association of the most essential genes with the proteomics dataset as well as categorizing and grouping genes to specific metabolic pathways which might be associated with biennial bearing.

A total of 225 proteins were found to be differentially expressed between buds from ‘on’ and ‘off’ trees. Downstream analysis revealed that only 35 proteins also had the corresponding gene significantly expressed. Further analysis of those proteins suggested an involvement of the aromatic amino acids (AAA) phenylalanine, tyrosine and tryptophan in developing buds from “off” trees.

These essential AAAs are building blocks for proteins and serve as precursors of several secondary metabolites, including auxins and phenylpropanoids. The latter are further catabolized to a wide range of compounds including chlorogenic acid. Metabolic profiling indicated that the same metabolites were found in Gala and Fuji bud samples; however, the abundance of each metabolite varied depending on the cultivar and the time of sampling. More specifically, chlorogenic acid and thiamine were more abundant in ‘off’ than in ‘on’ trees and it is assumed that both compounds are associated with a higher rate of flower bud formation.

Open and regular communication between the researchers in Australia and Germany has fostered great collaboration and ensured that the strengths of each team are fully utilized. The benefits of this project apply equally to both the science community and apple industry members. Due to the highly technical nature of this project, communication and training to date has focussed on the publication of scientific results to the research community. A number of the researchers within the project also attended an International Symposium on Flowering, Fruit set and Alternate Bearing in June 19–23, 2017, in Palermo, Italy, and an international meeting on fruit physiology and production in Michigan, USA, where results from the project were presented.

Research outcomes have been presented to industry at APAL speed updating sessions in 2015 and 2018, at HortConnections in 2018 and 2019 and in a video developed by RMCG and APAL.

A large amount of laboratory analyses and field experimentation has been completed and numerous genes and compounds involved in the initiation of flower buds in both biennial and non-biennial apple varieties identified. The key outcome of this project will be the completion of a rigorous scientific body of work which provides significant information to the research community and practical solutions for the apple industry.

Identification of compounds from apple that affect floral integrator gene activity and thus the transition to flowering in apple trees may lead to the demonstration that this substance can be applied to trees to regulate flowering without having any other negative effects on trees, humans and the environment.