Trees take off on pre-planting treatment 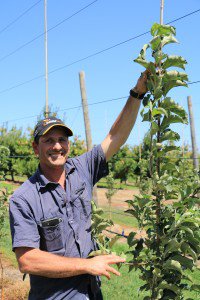 ARD can severely set back new plantings on old ground, knocking back growth and production by an estimated 20 per cent per annum for the whole of trees life.

Not willing to throw away that much productiont on his south west WA orchard, Rob has the soil pre-treated last year when replanting a 2.1hectare (ha) block from Cripps Pink trees to the higher coloured Lady in Red cultivar (both marketed as Pink Lady®).

Six months after planting, the young trees, on a mix of M26 and M9 dwarfing rootstocks, are already a foot over his head.

Chalk and cheese
Across the orchard, Modi® trees in second leaf on a block that was not chloropicrin-treated are a striking yardstick for the effectiveness of the treatment. In the ground a year longer, they are barely half the height.

A second block of Modi adjacent to the first, but planted on land which had lain fallow for eight years, is doing much better, further illustrating the impact on productivity of replanting straight into untreated old apple ground.

“I was using metham sodium, but I wasn’t getting the effect I wanted,” Rob said. “I’d seen the trials here and spoken to the guest speakers from New Zealand at numerous Future Orchard walks who would always mention their growers wouldn’t plant a new block of orchard without pre-treating using chloropicrin.”

The nursery trees were placed in coolstore in July at 5-6°C.

Chloropicrin was applied in a two-metre wide strip to a depth of 350mm four weeks prior to planting in late October 2018.

“Six months after planting I’ve noticed good overall growth of trees with a balanced height and side branch shoots,” Rob said. “I believe the good growth will make it possible to achieve 25t/ha at third leaf, 35t/ha at fourth leaf and 60+t/ha by fifth leaf.

“Compared to that, there will be no production from the untreated Modi until fourth leaf.”

Seventy per cent of the 20-ha orchard has been replanted over the last decade as Rob works to boost productivity and fruit quality.

“We replace what is least profitable,” he said.  “Sundowners and Royal Gala will probably go and we will replace them with a high colour strain of gala, Cherry Gala.”

A block of Cherry Gala on M106 rootstock in third leaf is showing fantastic vigour and already cropping 25t/ha. If not for some overly zealous chemical thinning, Rob believes it would have hit 35t/ha. “Now I have just got to slow them down,” he said.

“I’d like to keep the area of Pink Lady apples, but we will move to the higher coloured cultivars Ruby Pink, Lady In Red and Rosy Glow. The 25-year-old Cripps Pink are yielding 80t/ha and still bringing the returns, but they are harder to manage to get the colour.”

The new block of Lady in Red has been planted as single leaders on a vertical trellis, at 1.25m by 4m spacing for easier management and access for picking. At this stage, the plan is to keep the height a little lower also.

“Labour is a high cost so I want a tree that is easy to get at,” Rob said. “There is lots of healthy lateral wood, we can keep it short and its easy for the pickers to get to the fruit.”

Although sunburn can be an issue and the trellis could take netting, Rob only nets the Granny Smith.

“I wouldn’t plant another Granny Smith without netting,” he said. “Although as our seasons are changing, I’m sure we will be netting it all not too far down the track.”

Rob hopes to see 80t/ha from the block. “Our costs are increasing and our margins are narrowing and we can no longer make do with 60t/ha,” he said.

Hitting that goal will come considerably sooner than it would have done had the soil not had the chloropicrin pre-planting treatment.

“Going forward we will be fumigating all future replant blocks and using ARD-resistant rootstock when it becomes available,” he said.