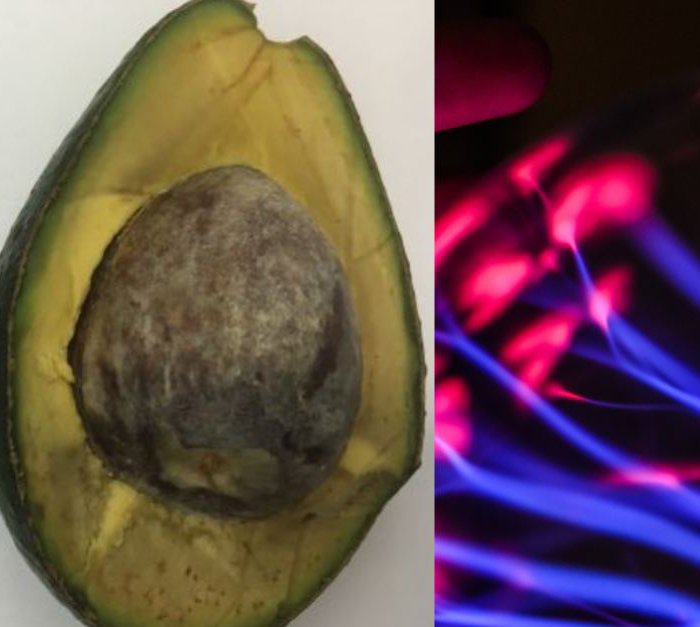 But that's what scientists at Murdoch University have developed, and it's causing great excitement among growers in Western Australia and around the world.

"There is nothing worse than when you go to the supermarket, buy a punnet of strawberries, and two days later they have got grey fluff all over them," plant pathologist Dr Kirsty Bayliss said.

"They go mouldy within a few days and you throw them away and it is money down the drain.

"It's the same with avocados, which is one of the products we have been working on."

The scientists are using cold plasma technology, which Dr Bayliss described as "effectively lightning" that left the fruit unscathed but killed mould spores.

"Basically it's just an ionised gas, you are applying an electrical current to a gas, and in our case we are just using the air and it creates this plasma," she said.

To help explain the process, Dr Bayliss regularly uses a toy plasma lamp with an electrode inside a glass globe that shoots out plasma filaments.

The technology is like the lamp but without the glass.

"It comes out as a flame like what you would see during lightning, and that actually zaps the fruit but it is only very low temperature," she said.

"It's called cold plasma because it is room temperature.

"It's not heating the fruit, it's not going to affect the quality, which is a major advantage."

'It blew me away'
Dr Bayliss first came across the use of cold plasma in 2015 on a young researchers exchange trip and her interest was piqued.

"I got to go to Thailand and I saw this technology and they were actually using it to control insects," she said.

"I thought, I'm a plant pathologist, I'm more interested in mould and fungi, can we use it on that?

"So I came back, bought a piece of equipment and I really didn't know if it would work at all, but it has just shown so many good results it blew me away."

For the past three-and-a-half years, they have been testing and refining the treatment technique on avocados, donated by growers who see huge benefits if the technology can be rolled out to packhouses.

"We have basically extended the shelf life from normally about five days out to almost three weeks, and that is solely by reducing the pathogens that cause the avocados to go black," Dr Bayliss said.

"It's a post-harvest mould called colletotrichum, which is a naturally occurring plant pathogen; it will occur out in the orchard and it carries through and naturally develops as the fruit ripens.

"We stop the spores germinating, and if they don't germinate, they can't infect the fruit and it doesn't turn black.
"So that is a massive achievement and the growers are over the moon at that."

The next step is to figure out how to transfer what they do in a laboratory to a busy packing house in Donnybrook in Western Australia's South West.

"[We must determine] which part of the process do we apply it in, or do we have multiple points?"

The team is also in the process of patenting the zapping time and technique to effectively prevent mould.

"This our intellectual property. The optimisation is not a quick process," Dr Bayliss said.

"That is where our expertise lies in doing that, because we have the background with these pathogens."

And this has meant Dr Bayliss regularly fielded calls from people keen to access the technology.

Grape growers, truffle producers, the citrus industry, and a national company that supplies berries and mushrooms are all keen to offer consumers a product that stays fresh without pesticides.

"Berries are massive, and every time you hear of food poisoning outbreaks, it's normally always on berries," she said.

"The more people hear about it, the more they say, 'Can you test this on our produce please', which is great."

On a recent trip to the United States, the Gates Foundation expressed an interest in the technology, which could potentially help small farmers in Africa who struggle to store their grain and fresh food in a way that prevents it becoming mouldy.

And a Murdoch University colleague is in Vietnam testing the cold plasma technique with local produce.

"It is genuinely exciting. When we started we had no idea if it would work, but that's the beauty of science," Dr Bayliss said.

Although the team knows the plasma treatment kills off mould and bacteria, they still don't know why.

"As a scientist I'm like, well what is it actually doing?" Dr Bayliss said.

"You can see very easily by looking down a microscope that it is actually stopping spores germinating.

"We have done a heap of work under the electron microscope and we can actually see that it is breaking down the cell wall and it is disrupting the cells.

"Whatever is going on is actually going on inside that cell and is stopping from germinating.

"So the next step will be going to molecular level — that to me is really exciting as a scientist, to be able to understand the mechanism behind it."