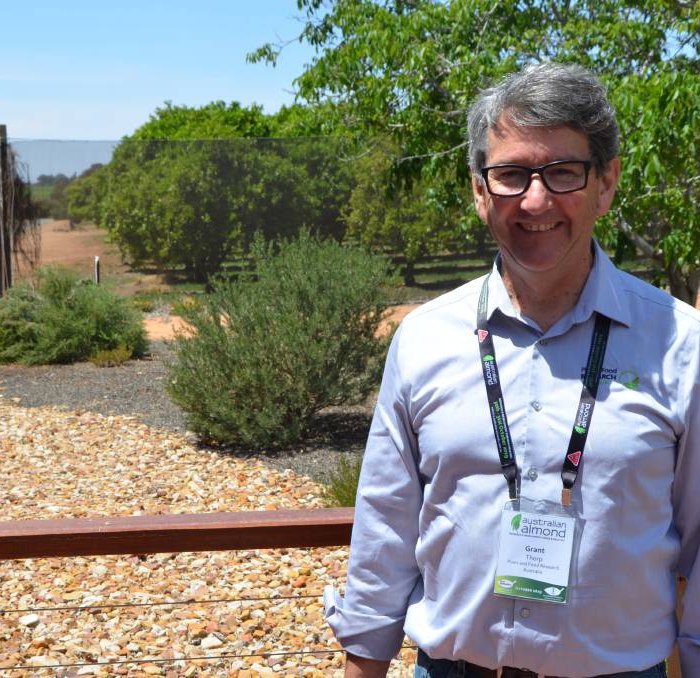 Improved tree architecture, including narrower canopies, could be the key to growing almond orchard production and efficiency, according to Plant and Food Research Australia senior scientist, Grant Thorp.

In a research program funded by Hort Innovation, various methods to improve almond production were investigated including better light distribution to the lower canopy of almond trees by using reflective groundcovers.

"If you want to improve light distribution in a tree's canopy, you're much better off having a narrower canopy.

Mr Thorp said the almond industry should aim to have a narrower canopy producing the same quanity of fruit as a wider, unpruned canopy.

"When we do narrow pruning we want rows to be narrow but when you're standing side on you want trees to be growing their full width," he said.

"We believe we can work on 4.5 metres across the rows, trees 2m apart and trees 5m high.

"You want the tree to grow tall, branches evenly spaced over greater distance, a good solid trunk, central leader uniform trunk all the way up, with no choke point.

"An upright growing tree is desirable, not spread over a great big area."

In trial work with 7.5m rows and 4.25m spacings, Mr Thorp said trees were planted in 2012 and first pruned in 2014, with a focus on removing branches that grew out into the row and could have an impact on machinery movements.

"What we learnt - and this is a system suitable for your standard tree coming out of the orchard - is to grow as per normal for the first one to two years then use heading cuts," he said.

"They're not cuts that remove that whole branch which is what we did the first time around. You cut the branch in half or cut one third off - that stimulates new growth and stimulates new fruiting wood.

"It fills out the lower part of the tree whereas in an unpruned tree you get quite a big void area. If you can fill that out with fruiting wood and have more of a hedge style system."

With those heading cuts, yields of 1.9 tonnes a hectare for Shasta, 1.5t/ha for Carina and 0.8t/ha for Nonpareil were achieved for third leaf trees.

"I believe with the narrow pruning system we can get rows down to 5 metres by 3 metres and you can end up with third leaf trees getting 3.4t/ha of kernel," he said.

"I think a lot of the solution lies with the nurseries. Instead of getting the trees pruned in the nurseries - getting the tops cut off the trees, and side limbs trimmed back to two buds - is to actually start the orchard with an unpruned tree.

"With an unpruned tree we can develop a central leader. They come out of the nursery as a central leader tree and we can maintain that. What that means is you're getting rid of that congestion of limbs coming from the same point, we're getting a much better tree structure and getting a lot of good fruiting wood down lower.

Mr Thorp said the goals for the high density almond project were based around the goal of doubling yields while not increasing costs.

"If an industry doesn't have the aim to double yields every 10 years then you're really treading water," he said.