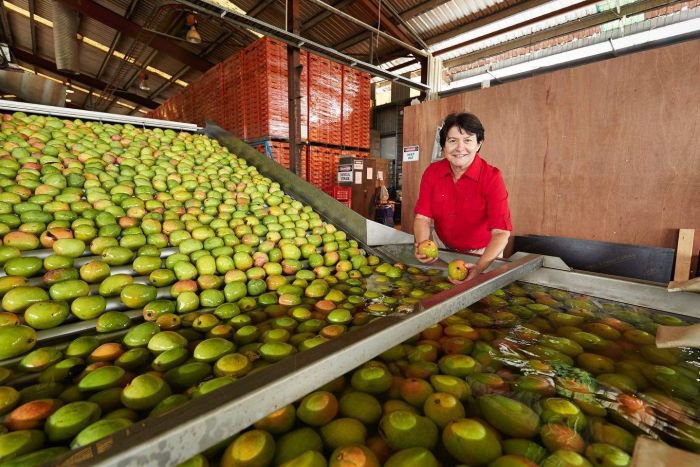 More than 200,000 trays were dispatched from the NT last week, but that will soon double as more farms ramp up and harvest gets underway in the Katherine region.

President of the NT Mango Industry Association, Leo Skliros, said this year's season had faced plenty of weather-related challenges, including a long run of cooler than average nights and a lot of fruit lost to gusty winds and fire.

"The NT's overall mango crop is going to be down on original forecasts," he said.

"It's probably going to be around 4 million to 4.5 million trays, which is still a lot of mangoes.

"It seems to be warming up now and at our place this afternoon it'll hit 40 to 41 degrees, which is actually hotter than I would like.

"But that will start pushing the fruit along and I think towards the end of this week you'll see most farms [around Darwin] getting into their main pick, and probably mid-next week hitting peak production.

"We're starting to get a nice spread of mangoes, the fruit is nice and sweet, and it's looking like being a fantastic season for growers and consumers."

For some packing sheds around Darwin it is turning into a long season, given some farms began picking in July.

Further south, the mango harvest has begun in Pine Creek and around the Katherine region.

Marie Piccone from Manbulloo Mangoes, said after a huge flowering event in Katherine, the season was now looking like a 'medium crop'.

"We'll be happy enough with the harvest, but it certainly won't be a bumper crop," she said.

Manbulloo's first pick of mangoes will be sent to markets in Perth, but as the season ramps up it will be supplying customers around the nation.

"We think we'll also be increasing our [export] volumes across Asia and North America this year," Ms Piccone said.

In Pine Creek, which has just one major mango plantation, owner Wayne Quach said he was on track to produce 40,000 trays this year and was hopeful of exporting some fruit to Saudi Arabia for the first time.

NT mango industry expanding
The mango industry in Australia has seen a lot of investment and expansion over the last five to 10 years and that is showing no signs of slowing down in the Northern Territory.

At Lambells Lagoon near Darwin, the company Cheeky Farms has recently built one of the biggest mango packing sheds in the Southern Hemisphere.

The multi-million dollar facility, which is the length of a football field, is filled with the latest packing shed technology, including machines which grade the fruit.

The company has been acquiring mango farms in the region and has big plans for the future according to manager Andrew Musumeci.

"We expanding and we're in negotiations to buy more land around Darwin," he said.

"We're confident about the mango industry because besides the strong Australian market, I think we still haven't touched the unlimited export market and that's where the biggest potential for growers are.
"We have China, Korea, Japan, Hong Kong, Singapore, plenty of places overseas that love Australian mangoes and need to see more of them."

Nearby, one of Australia's biggest fruit companies, Pinata Farms, is getting ready to start harvesting Honey Gold mangoes from one of its newest plantations.

Pinata now has around 170,000 mango trees in the Northern Territory, spread out over 570 hectares in orchards around Darwin, Katherine and Mataranka.

"We definitely will be putting more trees into the ground.