Macadamia nut 'trampolines' a potential game changer for the industry 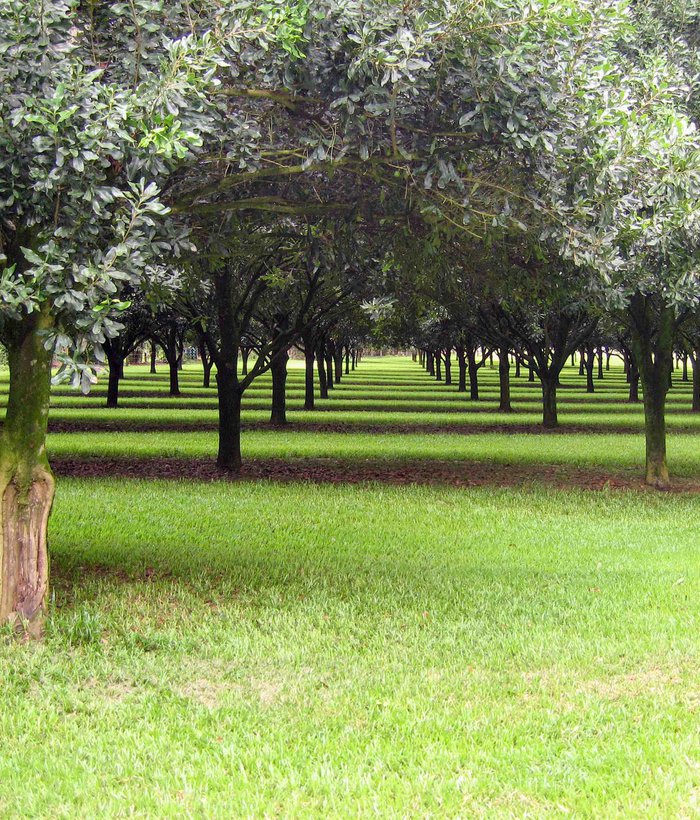 The equivalent of trampolines positioned under trees could forever change the way macadamia nuts are farmed, if the industry adopts what has been a very successful four-year trial for an innovative young couple.

Inspiration struck when Aimee Thomas was on her tractor "undoing a lot of the goodness" that she and husband James had achieved by building up a rich layer of compost around their trees' fragile feeder roots.

"Because we harvest macadamia nuts off the ground, we have to do a very good clean-up," Ms Thomas said.

"I was sitting on the tractor blowing and sweeping and just undoing all this great stuff that we'd been building up underneath the tree, and I was just really frustrated by it."

At $10,522 per hectare to buy and install, their decision to trial nets under three rows of trees at their farm, north-west of Gympie, was not cheap.

But the 140-metre-long strips of 30-per-cent-density shade cloth — angled at 30 degrees on both sides of the trunks — have paid off.

"It's almost like a trampoline; the nuts bounce off and generally bounce out into the middle of the row, away from the tree roots so we don't have to disturb them," Mr Thomas said. "It makes the machinery operation a lot easier. We're not trying to push up under the tree and we're not disturbing the ground at the same time," Ms Thomas added.

Under the nets, the soil below the thick leaf litter is rich with worms and biological activity.

The couple built a system in their processing plant and worked with scientists from Queensland's Department of Agriculture and Fisheries to compare the performance of the trial rows.

Soil organic matter, meanwhile, increased by 50 per cent, and the weight of the roots doubled around the trunks.

Dr Irvine-Brown estimated that the investment in netting would be paid back within four years, based on a conservative seven-year $4.50-per-kilogram nut-in-shell return to farmers.

Mr Thomas said the biggest difference was noticed in the worst years weather-wise. "With the increasing variability of our climate, we have definitely seen the benefits of improved water use efficiency of the trees, so they basically go for longer and the soil stores more water because there's more organic matter."

"And then in those extreme weather events, where we get too much rain at one time, the netting has shown to improve soil drainage and reduce erosion," Ms Thomas added.

"Which for us, because we harvest off the floor and really try and build up organic matter, is pretty critical for nutrition and floor surface."

Australian Macadamia Society chief executive Jolyon Burnett estimated that up to 10 per cent of a crop was lost just from nuts landing in places that could not be harvested around tree trunks.

"All of that allows that really precious soil environment to remain more undisturbed and develop a much more healthy and natural ecosystem that definitely delivers better productivity, but also maintains a healthier landscape."

Mr Burnett said while growers watched the trials with interest, he expected them to be cautious about adopting the innovation, given the large upfront capital cost.

"I suspect we won't see a great rush of installations of under-tree netting just yet, but the thing about a good idea that is grower driven is that if it has merits, growers will pick it up," he said.

"I know of two other orchards that are already planning to install reasonably sized trials of this idea on their acreage."