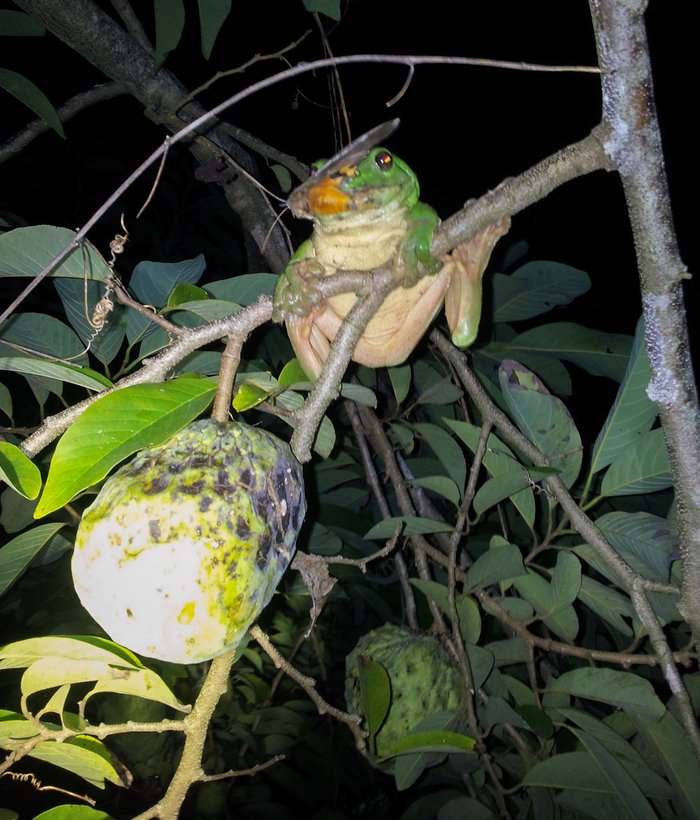 Fruit piercing moths (Eudocima sp.) were elevated to major pest status in many regions from the Northern Rivers of NSW up into tropical Qld last summer.

They are big; about 50mm long forewings mostly brownish and the hindwings are yellow-orange with dark spots.

According to Entomologist and manufacturer of PyBo natural pyrethrum insecticidal concentrate, Ion Staunton, moths and butterflies are generally just the adults that lay eggs which turn into ravenous caterpillars. He says that usually adults have non-functioning mouthparts or just a coil that can be extended to suck up liquid.

“These fruit piercing moths have a shorter, stout proboscis that can rasp its way through the fruit surface skin (think oranges and mandarins) to get to the juicy flesh and once they’ve penetrated they sit there sucking, oblivious to danger (such as an approaching tree frog as shown in the photo).

“They usually arrive and feed all night and often through the following day; several moths can be found crowded together on the once piece of fruit. The moth eyes reflect red in torchlight.

“The fruit is damaged beyond presentation for sale and, after they’ve left, the oozing juices attract other pests. The caterpillars of the fruit piercing moths are hosted by a range of native vines.”

Mr Staunton who advocates biological control of fruit piercing moths as much as possible – said that Gympie custard apple grower, Richard Henderson has sprayed at night with various insecticides but found that PyBo natural pyrethrum aggravated the adults to start flapping and absorbing more before flying off to die.

“He added extra dishwashing detergent to the mix to increase penetration through the thick layer of their powdery scales,” Mr Staunton said. “A parting comment was that he seldom found more than the odd wing under the trees because cane toads and brush turkeys had done the clean-up before he got out to check on mornings after application.”