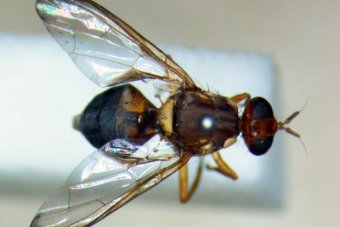 The male fly was discovered in a trap at Lady Barron, a few hundred metres from a previously-affected property.

Flinders Island was the first area in the state where Queensland fruit fly was detected in January, before other incursions were discovered in Spreyton, Devonport and George Town.

"Following the detections on Flinders Island earlier this year we have an ongoing response on the island," Dr Klumpp said.

"As part of our surveillance involved in the response, a single adult male was detected in one of our traps within a few hundred metres of a previous detection site earlier this year."

The latest discovery means the current control area restrictions on Flinders Island will be extended until at least March.

Control zones in mainland northern Tasmania will not be affected, and control measures there are expected to be lifted on January 9 if there are no new detections.

Those measures include fruit not being allowed out of restriction zones due to the risk of the pest spreading.

"We remain confident that we can eradicate fruit fly from Flinders Island and all of Tasmania and remain focussed on this goal," Dr Klumpp said.