Durian season off to a great start 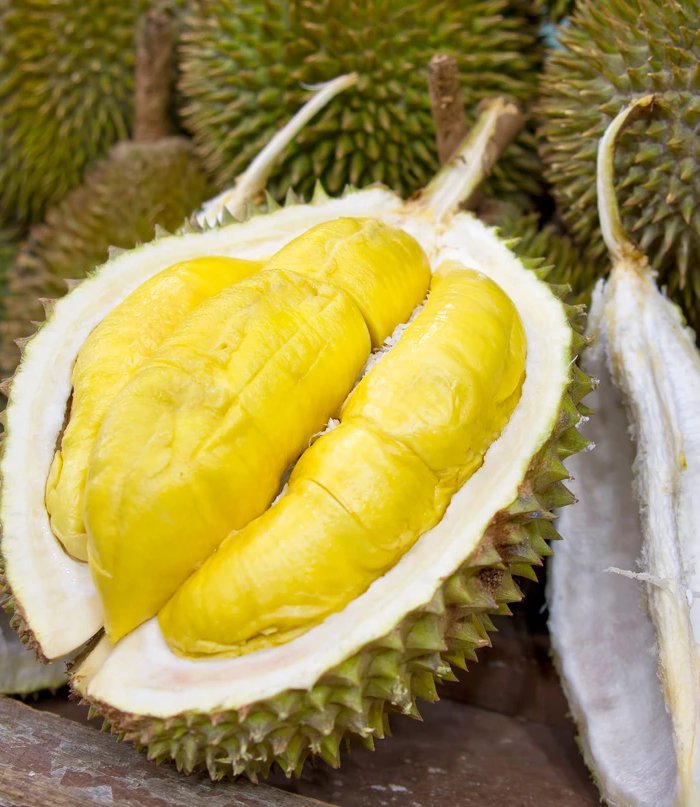 Australia's largest durian farm is busy harvesting this year's crop, and according to grower Han Shiong Siah, the season is looking and smelling great.

"If you can smell durian from the front gate, it's a good sign," he told ABC Rural.

"All of our fruit is tree-ripened, we collect them off the ground each morning, they're fragrant and you just know they're ready to go."

Across Asia, the durian is regarded as the 'king of fruits', but their pungent smell is not to everyone's liking and can be so offensive that in some countries it is banned on public transport and in hotels.

"The crop is looking much better this year. We're expecting close to 20 tonnes of fruit compared to just five tonne last year," he said.

The first durians of the season had been sent to markets in Sydney and Melbourne, and his farm had also sent fruit to Perth for the first time.

Tropical and exotic fruit sales manager for Mercer Mooney in Perth, Cameron Perna, said the arrival of durians from the Northern Territory was a big moment for his company.

"It was a little bit daunting, we got 800 kilograms of durian in one hit and had constant thoughts of 'Is this going to sell?" Mr Perna said.

"But it took us just three days to sell it. So our first pallet from the NT arrived on Monday and by Thursday it was all gone. It was a real highlight, it was great."
He said Canning Vale Markets had a history of buying durians from Queensland but never from the NT, and never in such large quantities.

"We normally get 200–300 kilograms at a time from Queensland, which gets air-freighted to WA.

"Everyone here in the markets knows what that smell is now and they come looking. The smell attracts the people, it's not deterring them."

The Siah family planted their first durian trees more than 30 years ago.

In recent years, as the plantation matured and produced more fruit, their NT-grown durians had piqued the interest of durian fans and journalists from around the world.

"Initially when we first started producing durian no-one had really heard of it. But thanks to social media, people are looking for them and know more about them," he said.

Mr Siah said it was Asian communities driving demand, but hoped all Australians would give the unique fruit a taste.

"Don't be afraid of it. The aroma can be off-putting for some people, but block your nose, because the taste and the aroma are totally different," he said.

Mr Perna said the exotic and tropical fruit category in Perth "was exploding" in popularity.

"I've got another pallet of [NT] durian landing this Friday and pretty much half of it has already pre-sold," he said.

"There's a lot more demand now for these different fruits — like all of the sapotes are selling well, soursop, rambutans, lychees.

"They're different, seasonal, and selling well."