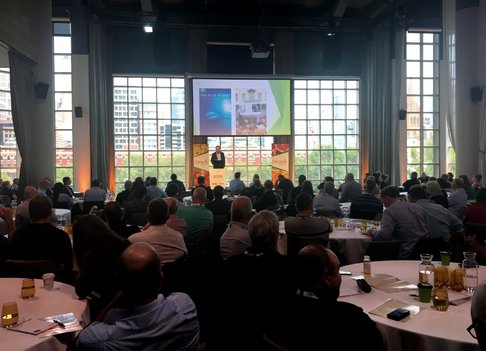 The Citrus Australia Market Outlook Forum has wrapped up in Melbourne, with the industry looking forward to the season ahead.

Citrus Australia Chair Ben Cant says there were a number of take-home messages he hopes got across to the 200+ delegates over the two days.

"There is a huge amount of opportunities in export, and there are a lot of trees that are going in," he said. "There is a lot of confidence in the industry that our record trade figures are going to continue going forward. Another key message is getting to know your consumer/customer and understand the supply chain, through technology, blockchain and genetic testing. There is also a lot of technology and it's amazing the profound impact technology is having on the industry."

"We had everything from planting stats to export outlooks, trade figures, and emerging consumer trends," Mr Cant said. "It really is a broad agenda, and the feedback we have had is really brilliant."

2019 was a record season for Australian citrus exports, but Mr Cant says while it is too early to make exact predictions, it is looking like a positive season ahead.

"The crop is showing to be a little bit lighter, but having said that, we thought last year, having smaller size profile would influence our pricing; and that would reduce the net result in trade, meaning that even though tones would be up, value would be down," he said. "We're quietly confident that we will get over the $500million mark again - we didn't expect we'd get $540million last year. Here's hoping we can get to $600million - our goals keep going up and up."

India is also on Citrus Australia's agenda after Washington Apples and Almonds have "blazed the trail" into the country.

"We see it as an opportunity, but it is long-term on our radar," Mr Cant said. "We send a lot of lower grade fruit over there. It is down on our priorities at the moment, but certainly, as that country evolves, being a chilled product, we need a stable supply chain, with retail outlets that are structured. So, we see India as around 10 years away, but we are starting to invest now and encouraging the growers and packers to build relationships, just like we did with China 10 years ago."

Another issue on the radar was the Coronavirus, with China a key trading partner with Australia, but Mr Cant says it is a situation the industry will monitor as the season gets closer.

"It can certainly go either way," he said. "That may be due to the reduced economic activity, and consumer behaviour focusing on essential items, and purchasing items like citrus will be reduced. But, that said, the markets are empty of fruit and 1.3 billion Chinese people, a significant portion, who are going to be looking for a Vitamin C hit, to increase immune levels. So, we are confident that there might be a spike in sales this year. Anecdotally, we saw that with trade data, post-SARS in citrus sales. So, we are hoping the Chinese will be back on board and better than ever."

Citrus Australia also honoured some of the leading contributors for the industry, at the awards dinner on Tuesday evening.

"It was about recognising those who had made huge personal and professional sacrifices, and been huge contributors to the industry," Mr Cant said.

"There were a couple of modern companies, with proud heritages, such as Nippy's with their juice exporting and Pinnacle Fresh with their retail promotions surrounding their Dracula Citrus have forged access into markets that are not really key, such as the United States - showing theatre will generate sales.

"Then we wanted to recognise the massive contributions of individuals, such as Billy Robinson from Mildura Fruit Company (MFC). He was one of the pioneers to create the China demand by getting the protocol right and getting growers over the line. Then there was Jack Parr, and really, the record trade we are seeing here he played a large role - we are standing on the shoulders of giants. We will be forever grateful for their legacy."