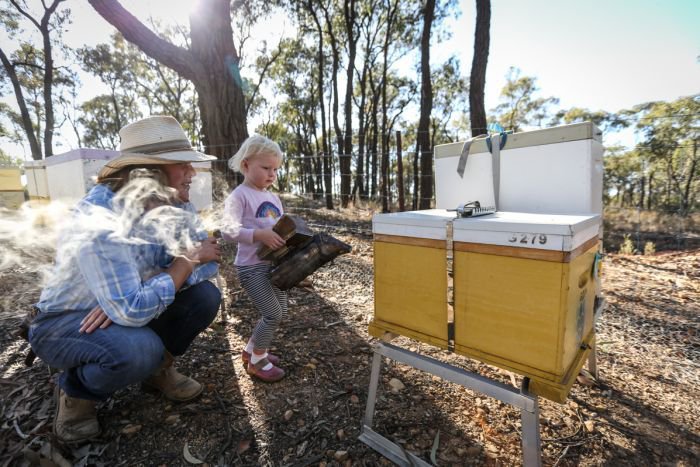 La Trobe University doctoral student and fourth-generation beekeeper Jody Gerdts has researched why Australian honeybees are so susceptible to the disease.

Chalkbrood disease is a fast-acting, spore-forming fungus which, after being ingested by bee larvae, takes just days to puncture the larvae skin and form a fungal mycelia on the outside of the baby bee.

"It affects the developing stage of the bee, so although it doesn't kill the whole hive, it can affect the number of bees that can go out and forage, bring home honey and help out with pollination," Ms Gerdts said.

The spores that infect the bee larvae are so small that they can travel on a single bee hair.

"It can form new spores and then become more contagious in the hive," she said.

With the help of beekeepers from all over the eastern states of Australia, Ms Gredts looked at the impact of hygiene, bee genetics and environment on the prevalence of chalkbrood, and has found there is a relationship between poor quality pollen and its prevalence in Australian honeybee hives.

He said nutrition was especially important for generalist foragers, such as honeybees.

"Like all livestock, if you've got the nutrition right, then you tend to take care of a lot of other pests and diseases. Bees are no different and, in fact, they are highly sensitive to that," Mr Briggs said.

"Nutritionally, they need to be able to forage across a wide range of plants."

Some pollen better than others
Like humans, bees need a full, balanced diet to achieve optimal health, but Ms Gerdts said poor quality pollen lets down the foraging honeybees.

Access to forests was needed at different times of the year to ensure bees had a quality diet.

"It's shown that eucalypts, different species, some of the pollen isn't very good for [bees], it doesn't have the full amino acid profile that bees need," Ms Gerdts said.

"Bees that have a good nutritional background in mainly proteins, pollens, amino acids, have a more robust immune system."

"A hive that's chronically infected reduces production by between 20 and 50 per cent," she said.

"It's everywhere, I would say 80 per cent of hives, at some point in time, will have chalkbrood."
While crops such canola, lucerne and clover were all good sources of pollen for bees, Mr Briggs said annual flowering herbaceous plants were best, including weeds farmers might get rid of.

"Most farmers would like to try and eradicate them from their properties, and those plants are in fact some of the greatest sources of high quality protein … like Paterson's curse, heliotrope, and all thistles," he said.

"Just because a plant isn't valuable for a grazing animal, doesn't mean it has no value at all."
But Canberra-based CSIRO research scientist John Roberts, who specialises in diseases of honeybees, said there was still more research to be done.

"From the current literature, we don't have a lot of clear evidence of how nutrition is influencing chalkbrood disease, but we know that, in general, nutrition is of key importance for creating healthy, more resilient colonies," Dr Roberts said.

Honeybee hygiene habits not a quick fix for chalkbrood
With so many insect bodies in one hive, it is important to keep the space clean — including disposing of dying bees — to avoid the spread of germs.

The impact of hygiene bee behaviour has formed a large part of Ms Gerdts' PhD research.

Dr Roberts said the findings would be useful for commercial apiarists.

"Her research has been really valuable for the industry because, in the past few years, beekeepers have been reporting increased issue with chalkbrood," he said.

"She's showing that it's not as well correlated as we had perhaps thought, that hygienic behaviour doesn't necessarily mean that you won't have outbreaks of chalkbrood," he said.

"I think what Jody's research has shown is that, as far as chalkbrood is concerned, there are some bees that are more innately resistant to some strains of chalkbrood than others," he said.

"That's a clear signal for me that some really focused selection in breeding for bees that are displaying an innate resistance to chalkbrood is a clear path for people, like in my role in the industry, to go down and look more closely at that."

Victorian apiarist and president of the Australian Pollinator Alliance Inc, Benedict Hughes, manages 100 hives in the Victorian Goldfields. He said although beekeepers knew their bees, the science behind the insects was more complex.

"I think if you step back, a lot of us are just beekeepers … we know how to manage our bees well, but we're not scientists. This research is really important to give us the science behind beekeeping," Mr Hughes said.

"I think it's really pleasing to know that we don't have a more virulent strain [of chalkbrood] in Australia."

Peter McDonald, Chairman of the Australian Honey Bee Industry Council, hoped the research would lead to a better understanding of the disease.

"This research will allow a greater understanding of the disease, which should hopefully lead to better management techniques and treatments to enable beekeepers to maintain strong, healthy hives," he said.

To ensure bees have a balanced diet, Ms Gerdts said it was important to ensure beekeepers had access to a wide variety of flora — if they could not ensure that, they needed to consider other ways to feed their bees.

"It's so important that [commercial apiarists] have access to big tracts of forest that have different flowers blooming at different times so that they can move their hives around and have access to the full nutritional profile the bees need," Ms Gerdts said.

"If you're a commercial beekeeper or hobby backyard beekeeper and you don't see pollen coming into the hive, you might need to think about supplemental feeding."