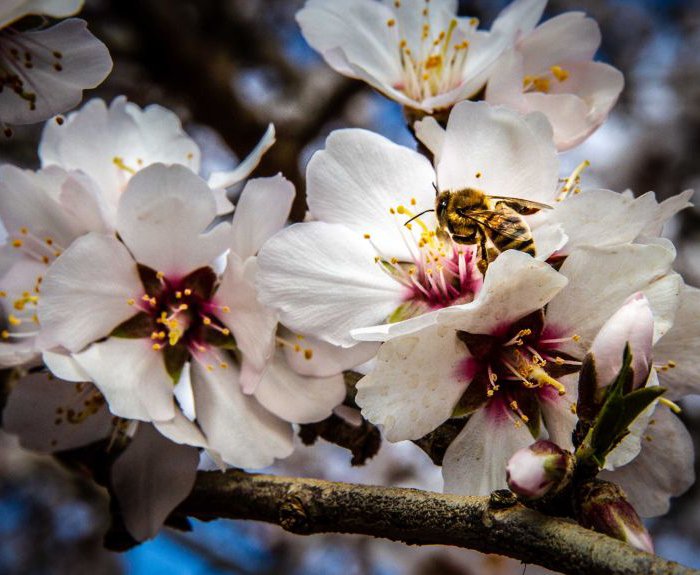 A record number of beehives is expected to be transported into Victoria's north-west next month for the almond pollination season.

It is the biggest movement of 'livestock' in Australia with billions of bees making the annual journey into nut orchards. Yes, bees are classified as livestock by the Australian Taxation Office.

Each year, beekeepers from around Australia transport their beehives to Victoria to pollinate the almond crop.

Almond trees are not wind-pollinated easily, so bees are required to pollinate and produce nuts efficiently.

The 'migration' should give a much-needed boost to insects who have been doing it tough during dry times, and bee broker Trevor Monson, who has been in the game for more than 40 years, says hives from Queensland, NSW and other parts of Victoria will be making the journey.

"It's coming together quite good actually,' he said. 'I think it'll be up around 130,000 [hives] that'll come into the district.

"We were very, very worried early on with the drought, then the fires and then the floods — and the condition of bees was very poor from smoke and heat damage.

"But then it all turned around; it rained in Queensland, and Western New South Wales and all of the weeds that have little flowers on them jumped out of the ground."

Mr Monson said he expected the bees to arrive in pretty good shape.

"Bees that are coming are going to be young, sort of healthy and vigorous, so that should be good, "he said.

"Even the beekeepers who've been around for a long time were saying how they [bees] responded when the rain came."

Long journey worth it

Queensland beekeeper Rex Carruthers saw the potential in crop pollination well before many other beekeepers considered it as a viable business.

"To me, there wasn't enough consistent money in honey — when it's good, it's really good and when it's not, it's terrible," Mr Carruthers said.

"So we now have three cash streams — we go to almonds, we sell bees, and we do honey."

For 16 years Mr Carruthers has been trucking his hives from the Sunshine Coast to Victoria, a journey involving over 20 million bees and several round trips.

"We'll either take three or four trips down depending on how many hives we've got."

This year, drought drastically reduced the nectar available in the wild, so every morning Mr Carruthers travelled to seven different sites to pour a mix of sugar water onto fresh barley straw into containers in a converted water pod.

The straw provides a raft, to prevent bees from drowning and a pollen substitute is also provided.

"This has been part of our management practice for possibly 12 or 13 years.

"We have a deadline to have these bees in Mildura, or Boundary Bend, in August so we can't not be there … because, with no bees, there are no nuts."

As the demand for almonds increases around the world, more plantations need pollinating.

Almond Board of Australia's CEO Ross Skinner said the number of hives and costs had gone up.

"There's been an increase in a number of hives required and most growers have secured the hives for the season," he said.

Multiple hives are needed on farm properties for successful cross-pollination.

"Six hives per hectare is the average," Mr Skinner said.

"There are growers who've only got a small acreage, right up to our largest corporates that have got in excess of 10,000 hectares." Mr Skinner said that, if everything went to plan in this season, next season would be even bigger.

"We're hoping in August that we'll have warm and dry weather so the bees can get out and do their job," he said.

"And that'll result in another record crop for the Australian almond industry going into 2021."