Small, sweet and high in Vitamin C — Australian growers are backing the jujube 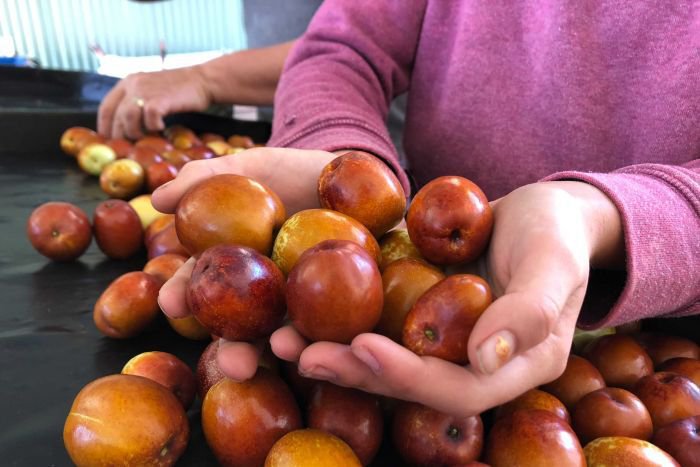 Also know as the Chinese date, the fruit is known well known in Asia, Europe and the Middle East and been described as having a taste like a small, sweet and nutty apple.

It was first introduced to Australia in 1993 as a part of CSIRO trial, but failed to take off.

Recently, however, production has been growing and there has been a push from industry to keep it on its upward trajectory with hopes a growing community of Asian-born people living in Australia would drive further demand.

China, where jujubes have been grown for thousands of years, is the world's biggest producer of the fruit and its biggest consumer.

The fruit is sold fresh and dried.

It is used in cooking and in Chinese medicine, with the fruit being praised for its Vitamin C content — containing 20 times more than any other citrus fruit.

WA production soars
Its health benefits are what has piqued the interest of many Australian growers.  The Western Australia Jujube Association said the number of growers in the boutique industry in the state had increased by 50 per cent over the last three years.

Georgie Warren, who farms in Capel in the state's south-west, is one of those growers. Now in her third year since planting, she is harvesting her first commercial-sized crop.

"We were looking around for something to grow and jujubes came up and we decided to give it a go," Ms Warren said. "It's been good so far, it's only early days, but people who do try them for the first time are more often than not repeat customers."

With 1,700 trees, all on trellises and completely under netting, it has been no small investment.

With so few people in Australia knowing what the fruit is, Mrs Warren admitted it was a risk, but one she was hopeful would pay off.

New state industry bodies
While Western Australia was made up mostly of small backyard businesses, it has been the only state in Australia to have a dedicated jujube association.

That will change on April 19 when South Australia, which is slightly further along in establishing an industry, gets their own association.

There are also plans to set up associations in Queensland, Victoria and New South Wales. Secretary of the WA Jujube Association Nola Doswell said growers were working on getting the produce to meet export-quality parameters to open up markets beyond Australia.

"Starting to export to China, Singapore and across the Mediterranean [would be beneficial] because our fruit ripens counter-seasonally to the Asian and Mediterranean market," Ms Doswell said.

Mildura-based long-term jujube grower Bernard McCarthy, whose parents were the first commercial jujube growers in Australia, said he believed the interest in the fruit was a positive step for the industry.

But he was concerned that supply might start to grow quicker than demand. In Australia, jujubes retail for about $20 a kilogram.

"Prices have generally gone up each year along with the supply because the demand has grown in keeping with that, but it hasn't been [significant]," Mr McCarthy said.

"At the moment though there are a lot more people jumping in the industry. "Every year I think is this the year that [prices] are going to come back to earth a bit."

Ms Doswell said she believed it would be a long time before the domestic demand was filled.

"I'm constantly contacted by the eastern seaboard from wholesalers over there wanting our fresh fruit," Ms Doswell said.

She said the association was trying to educate as many non-Asian and Mediterranean people about the fruit to further that demand.