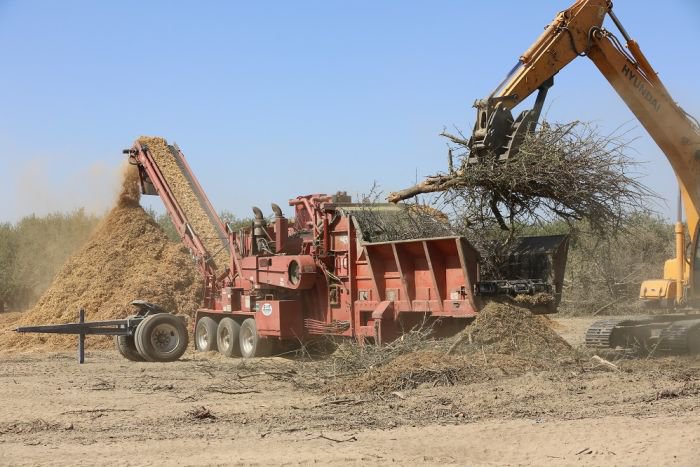 The whole-orchard recycling project has been trialled for more than a decade in California, where old trees are ground up to woodchips and put back in the ground of the newly planted orchards.

It has proven to be a more sustainable method of tree removal and disposal.

Common industry practice when trees have lost their productivity is to burn the old trees when removed, but all the nutrients the trees held are lost.

In the US, trees are also often ground up and burnt in a co-generation plant for electricity, but both practices contribute to increasing air pollution.

As Australia's almond industry is only entering the phase of replacing old orchards, growers are looking at the option to adopt the whole-orchard recycling method.

University of California Cooperative Extension county director and farm advisor Brent Holtz, in San Joaquin County, said their whole-orchard recycling project helped growers not only reduce their carbon footprint, but also improve soil health for the next generation of trees.

"The trees grew better and had higher nutrient levels and ultimately greater yields, and we also found that in the soil, it stored more carbon and we had higher organic matter," Mr Holtz said. "This will also help the water-holding capacity of the soil and nutrition of the next-generation trees."

Mr Holtz said adding an old almond orchard back into the ground meant adding 64 tonnes of woodchips per acre and about 64,000 pounds of carbon to the soil.

Almond Board of Australia industry development officer Joshua Fielke said growers aimed to get 25 years of productivity out of their trees.

He expected about 25,000 hectares of trees across Australia would need to be pulled out and replanted over the next 15 years.

"To be able to just utilise all that carbon instead of putting it in the atmosphere, we'd be able to incorporate it into the soil and that would be beneficial for everyone," Mr Fielke said.

"So there is going to be a huge biomass problem of what to do with all this, and this project provides a sustainable alternative."

Almond growers could make industry more sustainable
Mr Holtz said recycling almond orchards would not only reduce growers' carbon footprint, but also would help to use nitrogen more efficiently, preventing it from leaching into the soil profile, water table or environment.

Nitrate leaching can degrade groundwater quality and often occurs when water moves nitrate below the root zone before the plant roots have a chance to take up the nitrogen. "A lot of soils in Australia are very sandy, and it's not very high in organic matter," Mr Holtz said. "Organic matter is important and will help bind the nitrogen."

Mr Holtz said growers would be able to reduce their environmental impact and make the industry more sustainable through the whole-orchard recycling project, as results found an increase of the soils' organic matter by putting the woodchips back in the ground.

"I think the organic matter will help bind fertilisers, insecticides and pesticides that might move through the environment," he said. Mr Fielke said one of the major issues for Australia's almond growers was the water-holding capacity.

"We have to irrigate pretty well every day to just be able to make sure that we are not leaching through and not wasting that water in the profile," he said.

"We have to do it every day so that we can maximise the water and nutrition that we are putting onto the trees. "If the results are showing benefits over in California, and they have on the soils that are a lot stronger over there, then I think it can increase our soil potential massively."

Challenges to get recycling project off the ground
To convert trees into woodchips, heavy machinery chippers and grinders are needed, which can be costly for growers.

"I think it will be expensive for the growers to do but I think it will in the long term still work out financially better for them, if they have increased yield based on the organic matter," Mr Holtz said.

He said recycling old trees would also be more valuable for almond growers because they spent 25 years growing the trees and invested a lot in the woody material, which then could be used to benefit their new orchard rather than going to waste.