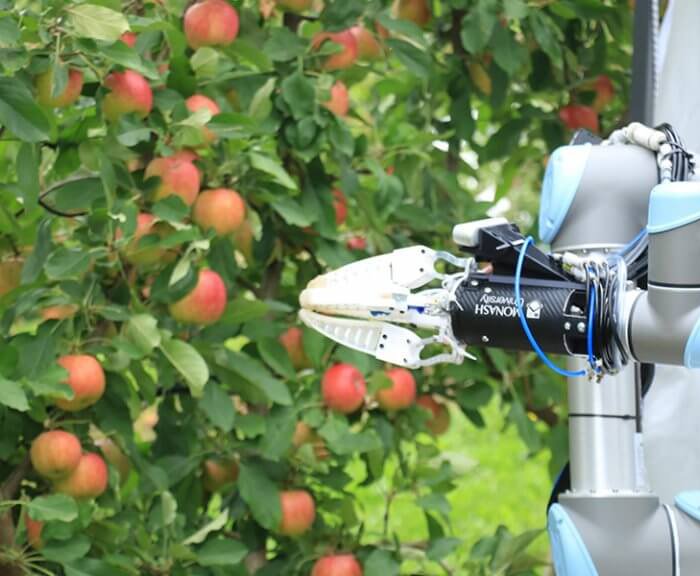 MARS – the Monash Apple Retrieving System, developed by Dr Chao Chen of Monash University’s Department of Mechanical and Aerospace Engineering has been developed as part of a three-year research project to improve orchard efficiency and address agricultural labour shortages.

The robot works autonomously, identifying fruit, avoiding obstacles and self-driving through the orchard rows as it harvests.

The MARS robot has three components:

- The vision system, used to identify and detect the position of the apples
- The robotic arm that carries the ‘hand’ to the target apples
- The soft robotic hand itself, with a suction cup and gripper

“The design of the hand provides a double security of the suction cup and grasping force,” Dr Chen said. “These allow us to increase the picking success rate quite dramatically.”

MARS testing took place at Fankhauser Orchards over the 2021 harvest. During the two-week testing periods in February and April, Dr Chen’s team put MARS to work first on Smitten apples, then Pink Lady, all within the specially constructed 2D orchards.

“These are very different to a 3D tree,” Dr Chen said. “Essentially, the robot is like a vehicle, and the orchard is like the road. The vehicle and the road have to satisfy each other’s requirements in order to function, so there will be advancements needed for both the robot and the orchard going forward, and these will change.”

Dr Chen’s vision is for the robotics system to work with humans rather than completely replace humans in the orchard. However, the nature of this mixture will change.

“For example, the robot will work better in bad weather (too hot, too cold, and wet) and at night. The robot can harvest fruits at height which might be difficult for human to reach,” Dr Chen said. “With advance of robotic tech and re-engineering of orchards, a robot will become more efficient and cheaper, but people will still be picking apples that are tricky for the robot to access such as those deep inside a canopy.”

Dr Chen sees potential in robotic evolution into other farm tasks such as pruning, once systems become more advanced and can more easily negotiate the plants and space of structured robot-friendly orchards.

Beyond the practicalities of harvesting, Dr Chen sees robotic innovations such as MARS as a new way of attracting young people to orchards with exciting Agtech.

“The trend we see is that young people prefer to live in big cities, because they see these as offering more opportunities, whereas they still see rural areas and farming as ‘behind’,” Dr Chen said. “Having these robotics systems in the farm can attract young people in a number of ways. It gives them the chance to work in engineering and development with very advanced technology. It also changes the nature of work on offer: less labour, more management.”

“It’s possible that the robot could follow different harvest seasons throughout the year,” Dr Chen said. “MARS can start with apple harvesting, then citrus harvesting starts at end of apples. Once citrus finishes, it goes to stonefruit, then it’s the beginning of apples again. We are very keen to investigate how system can be adapted to different fruits.”

Dr Chen is confident that the technology is ready for commercial development now as the initial key challenges were overcome.