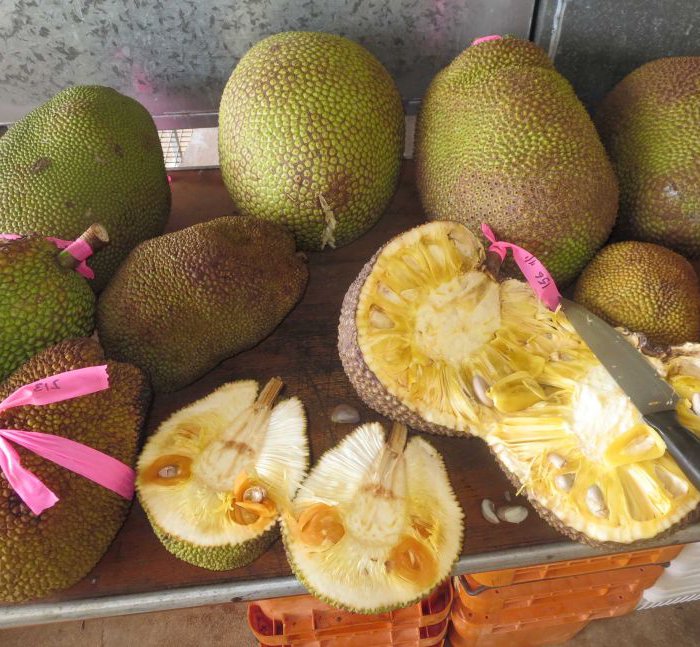 Manbulloo Limited grows mangoes across seven farms in the Northern Territory and Queensland and has just planted about 100 jackfruits on one of its properties near Katherine.

Managing director Marie Piccone said the company wanted to test out the growing and market viability of a new crop.

"We'll be measuring a whole lot of attributes, including time from planting to the first crop, annual yield, consumer acceptance and post-harvest shelf life," she said.

The younger jackfruit is growing in popularity as a meat alternative for vegetarian and vegan consumers.

Ms Piccone said Manbulloo would consider the potential for both markets for jackfruit.

"We don't really know [what the market demand is], but we do believe that there's probably potential for both the products," she said.

"Both are used extensively in Asia and other tropical regions. This is a really, really early-stage crop in Australia."

NT Department of Primary Industry (DPI) researcher Mark Hoult has been selecting the best jackfruit from around the Darwin region and propagating them at the Coastal Plains research station for years. Four selections from this orchard have been planted at Manbulloo's farm.

"It's encouraging to have a large, national company keen to improve the crop and see if the prospects are there for growers," he said.

"I think Marie Piccone's company are pretty astute growers and marketers of products, so it will be good in terms of having that overlay at looking at this material from a large commercial context."

The DPI is hoping to sign-off on a new project, partnering with Monash University's Food Development Hub, to look at new food products.

"We hope to link in the newer [jackfruit] genetics with the potential products that the Monash University team might be able to develop," Mr Hoult said. "There's a lot of interest in the vegan and vegetarian product development area, and jackfruit is often used as a pulled pork-substitute; it's quite a versatile product."

ABC Rural understands the NT produces about 500–600 tonnes of jackfruit a year, which is about 70 per cent of the national crop.