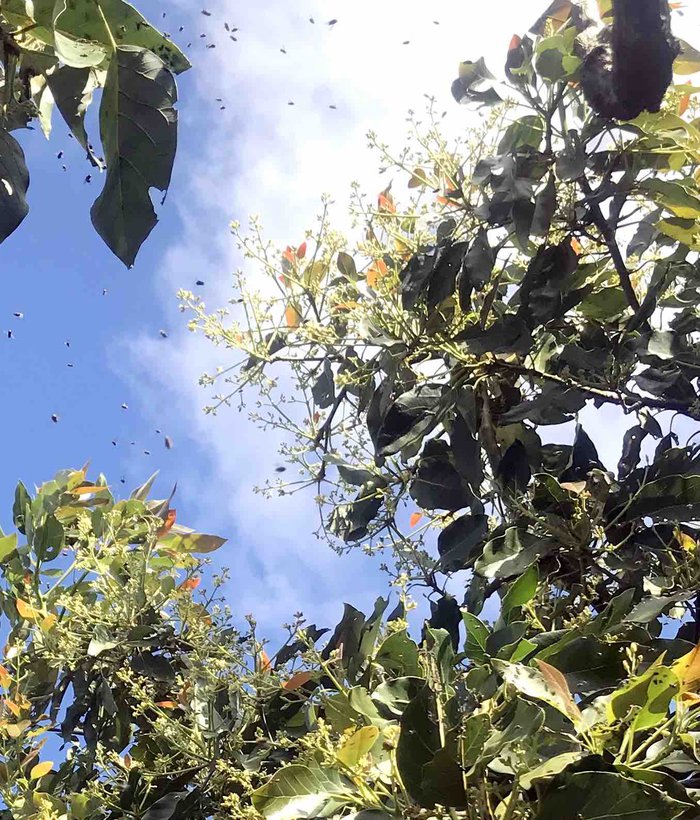 FlyGro came to life because grower, James Wheildon needed better pollination rates on the farms he was managing, and like all good ideas it evolved naturally on its own.

FlyGro is a newly developed pollination product for farmers that need pollinators for fruit set. FlyGro comes in a 10L biodegradable box kit which attracts and breeds up local fly numbers to pollinate your crop.

And with some help from farmers who financed FlyGro research through the purchase of his experimental FlyGro to trial over the research period, there has been some hit and misses and learnings along the way.

Mr Wheildon said flies are well-known pollinators that can contribute to fruit set. “FlyGro was designed to work with your current pollination program, not to replace it – the more pollinators the better,” he said.

“Your biggest concern should be how to keep the heavy fruit set on the tree. For that you need all the pollinators you can get, both bees and flies. More pollinators visiting flowers taking nectar, the more flowers each pollinator has to visit.

“Flies visit flowers all day no matter how hot it gets so during the heat of the day when bees go home, flies are still visiting the flower when avo’s change the sex of their flowers, flies are there.”

Mr Wheildon said it’s taken three years of R&D to get not just the fly meal right, but timing, rate/ha, amount of product, container type and where to place FlyGro.

“These were all questions that we set out to answer and a few that pop up along the way. I worked out in the first year that placement has to start early, due to the life cycle of the fly. To have the fly numbers to make a substantial difference and achieve a higher fruit set.

“The goal ended up being to carry the last of the autumn flies with enough numbers through winter to explode into spring flowering with high numbers, having thousands turn into tens of thousands for pollination.

“But we also found every farm is different. Most orchards have a small number of flies in the orchard or nearby. Most orchards have enough leaf litter or hay under trees or bushland around their orchards to provide enough flies to attract and breed up high numbers into your orchard which can be utilised for pollination.

“On these farms with healthy fly populations in or nearby, a standard application with heavier rates through centre of the orchards will yield large pollinator numbers.”

Mr Wheildon said the orchards with low fly numbers due to pest management programs or having no good breeding grounds for the flies on farm needed different treatment.

“That farmer might have to attract them in with heavier application along a border where flies are, then the next application is all further infield.

“With the aim of finally encouraging them throughout your farm, orchards like macadamias with no leaf or organic matter under trees, might need a light application of FlyGro all year round to ensure flies are present when needed.

“With every year you use FlyGro, the numbers are easier to increase – in the second year fly numbers and fruit set are more noticeable.”

Mr Wheildon said the only insecticide that shouldn’t be used when FlyGro boxes are in field is chlorpyrifos as it can concentrate in box and affect the maggots.

“Now we believe that FlyGro is ready to help the farmer set more fruit. With FlyGro’s 10L biodegradable box kit, FlyGro is now easier to mix with 5L of water through the bag, then left in the bag open in the box for 48 hours to ferment.

“Flies will come during the fermenting stage and start egg lay. So, during fermenting you can place up to 16 boxes on a pallet near local fly hang outs. After the 48 hours fermenting, take the kit down to the field, place the box under the canopy and in watering zone if possible.

“Empty the FlyGro out of plastic bag into the biodegradable box. Once the box is in the permanent position it can’t be moved. The box and FlyGro will break down in time with no ill-effects. Place the plastic bag in bin as it is only required for the 48 hours of fermentation as FlyGro absorbs the 5L of water.” 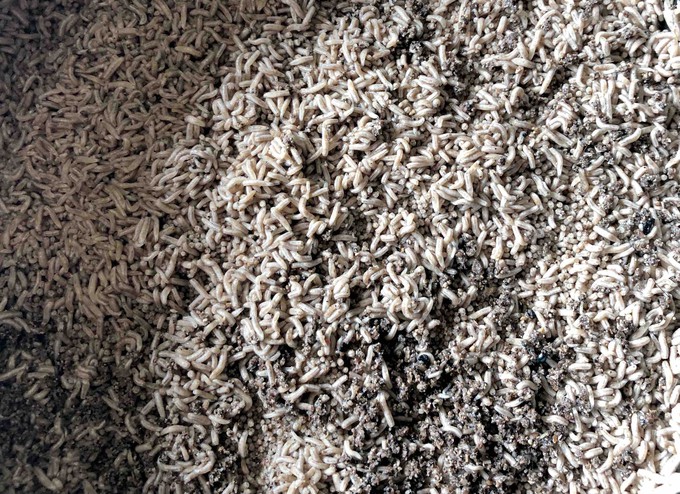 Mr Wheildon said FlyGro will attract flies in and provides a great breeding ground for the maggots. FlyGro can last up to 4–6weeks in the field but can be eaten out earlier in the peak of the season and you will be left with a box of maggot droppings at this stage. The flies will then move onto another box of FlyGro.

“During R&D we noticed a few interesting points,” he said. “The first one is the type of fly per placement – two different types of flies normally won’t lay eggs in the same box. They will set off some sort of pheromone and all those type of flies in the area come in for a mass egg lay at once.

“We normally find lots of different types of flies in an orchard and FlyGro offers breeding grounds for all with enough boxes used.

“Recommended rates on the box are the minimal amount and for built-up areas as we want a fly pledge in your orchard not at your neighbour’s house, so label rates of boxes/ha is on the conservative side.

“As a broad application, FlyGro across an entire district area is untested even though FlyGro is used out of the main fly breeding season. And chemicals used after fruit set kills adult flies, so it keeps a lid on fly numbers.

“But if all goes as suspected next year, rates will be more boxes/ha on label. And a knockdown should be done after fruit set to make sure flies don’t spread out into the district.

If you are in remote area, Mr Wheildon said you can double the label rate. “As FlyGro’s main aim is to carry a breeding population from the end of autumn through winter for an explosion of flies for spring flowering.

“So, at least three applications starting just before winter around late April/May for the first application is recommended. At label rates, including labour, the cost of placement is just $35/Ha or at 160 trees/Ha = 0.21cents/tree.