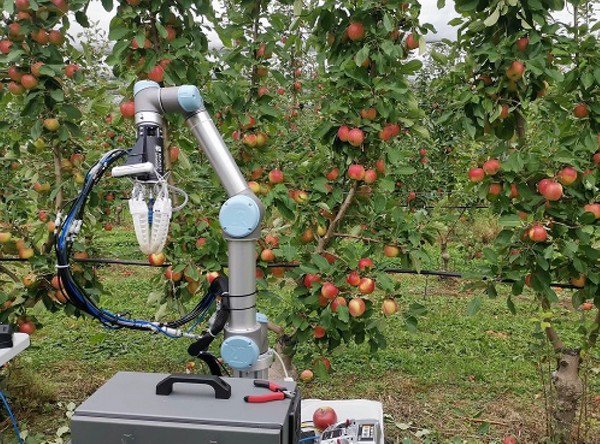 Like many industries across the world, Australia's fruit-picking sector has been impacted heavily by the COVID-19 pandemic, creating a massive void in the labor market that would normally be filled by backpackers. Local researchers have cooked up a creative partial solution to this problem, developing a fruit-picking robot that can harvest apples from orchards at high speed.

Robots stand to benefit the world of agriculture in all sorts of ways, from inspecting crops, to herding sheep, to combing fields and zapping weeds with lasers. We're also starting to see how they can play a role on the food production side of things, with robots emerging that can pick raspberries and harvest iceberg lettuce, or even prune fruit trees to keep them healthy and free from disease.

Researchers at Australia's Monash University Department of Mechanical and Aerospace Engineering have turned their attention to apples. The robot uses a mix of cameras and deep learning algorithms to scan the trees of an orchard and detect the pieces of fruit, which requires it to process information on their shape, orientation and the location of the stem-branch joint to minimize damage to the produce and the surrounding foliage.

“The robot grasps apples with a specially designed, pneumatically powered, soft gripper with four independently actuated fingers and suction system that grasps and extracts apples efficiently, while minimising damage to the fruit and the tree itself," says Dr Chao Chen, who led the research.

According to the team, the robot can identify more than 90 percent of apples within the view of its camera and a distance of around 1.2m. It says the machine can operate in all lighting and weather conditions, and requires less than 200 milliseconds to process the image of an apple.

The researchers have been conducting field trials of their apple-harvesting robot this year, and report that it damaged less than six percent of its haul by inadvertently removing their stems (though these stem-less apples still may be sold by some retailers). Running the machine at half speed saw it identify, pick and deposit an apple every 12.6 seconds, while streamlining the pick-and-drop process saw this reduced to around 9 seconds. Ultimately, running the robot at full capacity cut this harvesting time to seven seconds per apple.